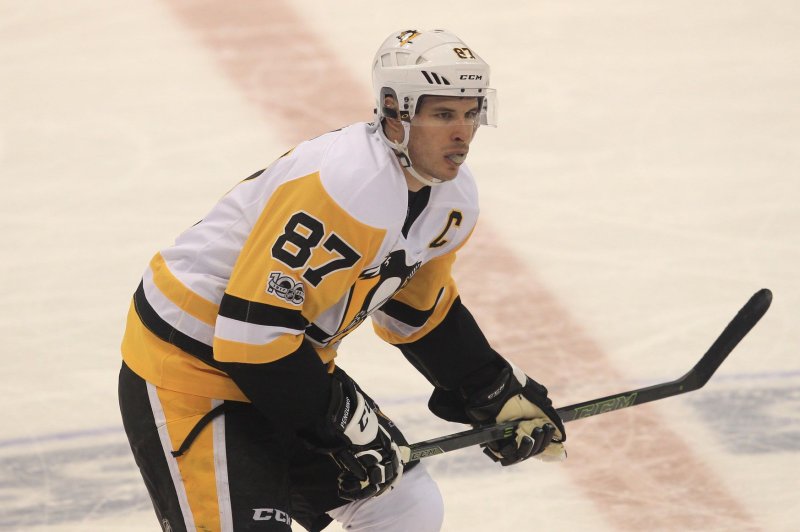 Pittsburgh Penguins Sideny Crosby keeps his eye on the puck as he crosses the red line in the first period against the St. Louis Blues at the Scottrade Center in St. Louis on February 4, 2017. Photo by Bill Greenblatt/UPI | License Photo

ST. LOUIS -- Sidney Crosby scored two goals and assisted on another Saturday night to lead the Pittsburgh Penguins past the St. Louis Blues on Saturday for their third straight victory.

Crosby, who did not record a point against Columbus on Friday, has not gone two consecutive games without a point since Feb. 24-27 of last year. He scored at least one point in 35 of the 45 games he played this season.

Crosby's second goal of the game, his league-leading 30th of the season, came into an empty net with 18 seconds to play.

Crosby earned his second point of the night when he set up defenseman Justin Schultz for the Penguins' third goal at 12:02 of the second period. It was his 29th assist of the season. The two points left him three shy of reaching the 1,000 point mark.

The young Maple Leafs blew leads of 4-1 and 5-4 before van Riemsdyk beat Boston backup goaltender Zane McIntrye only 1:18 after Patrice Bergeron tied the score with a power-play goal. Van Riemsdyk untied it with his 19th of the season.

The win was the third in as many tries for Toronto over the Bruins this season. The Maple Leafs scored 14 goals in the three games. Goaltender Frederik Andersen was the winner in all three and is 7-0 lifetime against Boston.

Jay Beagle and Andre Burakovsky also scored for the Capitals, who are 15-2-2 in their last 19 games.

Max Pacioretty scored his 25th of the season for the Canadiens.

Granlund extended his franchise-high points streak to 12 games (five goals, 12 assists). It's the longest points streak in the NHL this season. He's also set career highs with 15 goals and 48 points.

DALLAS -- Trevor van Riemsdyk scored the game-winning goal with 4:03 remaining and Corey Crawford stopped 31 shots as Chicago improved to 4-0-0 versus Dallas this season.

Dallas got goals from Radek Faksa, Jamie Benn and Tyler Seguin. The Stars finished their season-long six-game homestand at 2-2-2. Dallas fell to 0-18-2 when trailing after two periods.

Taylor Hall scored two goals, including an empty-netter with 3:12 remaining, and Travis Zajac added a goal and an assist as the Devils won their fifth straight on the road. Defenseman Seth Helgeson added the final goal -- his first -- with 29 seconds left.

Matt Calvert scored a short-handed goal for the Blue Jackets. Columbus, which entered Saturday leading the NHL in power-play percentage at 24.6, is 0 for 4 with the man advantage over its last five games after going 0 for 2 on Saturday.

Budaj made 17 saves in improving to 25-14-3 in place of injured starter Jonathan Quick, sidelined by a groin injury since mid-October. He extend his shutout streak to 144 minutes, 5 seconds.

Carter scored his team-leading 27th goal and is tied for the Kings' franchise record for game-winning goals (nine) and overtime goals (four). The Kings improved to 11-4 in overtimes this season.

TAMPA, Fla. -- Brian Boyle had the deciding goal in the fourth round of the shootout to lift Tampa Bay past Anaheim.

Nikita Kucherov, who finished with two assists, scored in the third round to keep the shootout alive. Jonathan Drouin and Alex Killorn scored in regulaton for the Lightning while Ben Bishop made with 14 saves in regulation and overtime.

Brandon Montour, called up earlier in the day, scored his first NHL goal and Ryan Getzlaf also tallied for the Ducks. Jonathan Bernier made 35 saves.

Shane Doan snapped a 16-game goalless drought with his 401st career goal for the Coyotes. Smith made 38 saves in regulation and overtime.

Patrick Marleau, who scored his 500th career goal Thursday, extended his points streak to a season-high six straight games with an assist for the Sharks.

Green scored his 10th goal of the season on a wrister from the high slot at 18:30 of the first period that found its way through traffic at the goalmouth and appeared to tick off Pekka Rinne's catching glove before finding the net.

The Red Wings won their second straight game after losing five in a row and swept the season series from the Predators for the third straight season. The result snapped Nashville's six-game point streak at home dating to Jan. 3.

NEW YORK -- Ron Hainsey scored with 2:08 left in overtime -- his second goal of the game -- as Carolina outlasted New York.

Anders Lee, Casey Cizikas, Brock Nelson and Josh Bailey scored for the Islanders, who have lost two straight (0-1-1) for the first time since a three-game skid from Jan. 6 to Jan. 11. Goalie Jean-Francois Berube made 20 saves.

It was Lehner's first shutout of the season and the fourth of his career. Kyle Okposo, Ryan O'Reilly, Sam Reinhart and Marcus Foligno scored for the Sabres, who snapped a three-game losing streak.

Mike Condon made 21 saves for Ottawa before being pulled for Andrew Hammond midway through the third period.

It was the first time the Avalanche won at home in regulation since Nov. 15. Nathan MacKinnon and Carl Soderberg also scored, Duchene had three assists and Calvin Pickard stopped 23 shots for Colorado. The Avalanche won for second time in 17 home games.

Adam Lowry scored twice for Winnipeg, which missed a chance at a 4-0 road trip. Ondrej Pavelec made 23 saves for the Jets.