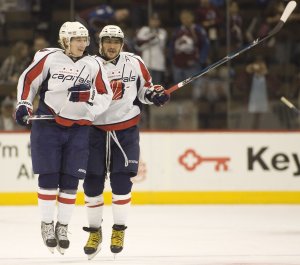 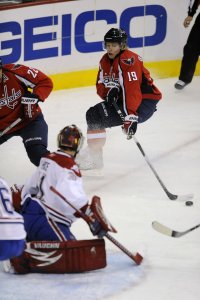 NHL // 1 year ago
Kuznetsov, Carlson spark Capitals comeback win over Maple Leafs
Evgeny Kuznetsov and John Carlson led the Washington Capitals to a comeback victory against the Toronto Maple Leafs after trailing 2-0 in the first period.

NHL // 2 years ago
Capitals host Ducks in search of eighth straight win
The Washington Capitals won their first Stanley Cup last season, but it's been some time since they've enjoyed a run like this.

NHL // 2 years ago
Jackets looks for measure of revenge vs. Caps
WASHINGTON -- The Columbus Blue Jackets will visit the Capitals Friday for the teams' first meeting since their first-round Stanley Cup playoff series last Spring.

Lars Nicklas Bäckström (born 23 November 1987) is a Swedish professional ice hockey center and an alternate captain for the Washington Capitals of the National Hockey League (NHL).

Bäckström's father Anders is a known Swedish hockey player who played his whole hockey career for Brynäs IF, totaling 10 seasons for the club. Nicklas' older brother Kristoffer is also a hockey player, but in the second tier of the Swedish league system with Hammarby IF.

Bäckström was a top prospect in the 2006 NHL Entry Draft and was selected fourth overall by the Washington Capitals. With that, he became the fourth-highest drafted Swede, after Mats Sundin (first), Daniel Sedin (second) and Henrik Sedin (third). Victor Hedman was later picked second in 2009.

FULL ARTICLE AT WIKIPEDIA.ORG
This article is licensed under the GNU Free Documentation License.
It uses material from the Wikipedia article "Nicklas Backstrom."
Back to Article
/