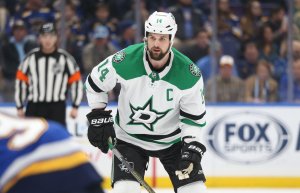 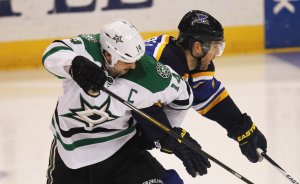 NHL // 3 years ago
Stars starting to click; Red Wings still struggling
DETROIT -- The Dallas Stars are beginning to play the way they want to and the Detroit Red Wings aren't.

Jamie Benn (born July 18, 1989) is a professional ice hockey left winger currently playing for the Dallas Stars of the National Hockey League (NHL). Benn played his junior hockey with the Kelowna Rockets of the Western Hockey League (WHL) prior to turning professional. He also represented Canada at the 2009 World Junior Championships, where he helped capture a gold medal.

Benn was drafted by the Dallas Stars 129th overall in the 2007 NHL Entry Draft from the Victoria Grizzlies of the Junior A British Columbia Hockey League (BCHL). Following his draft, Benn began his major junior career with the Kelowna Rockets in the WHL. He scored 65 points in his rookie season in 2007–08, then improved to a team-high 46 goals to go with 36 assists and 82 points in just 56 games in 2008–09. After being named to the WHL West First All-Star Team, Benn paced the Rockets with a playoff-leading 33 points en route to the 2009 Ed Chynoweth Cup title. In the subsequent 2009 Memorial Cup tournament, held in Rimouski, Benn notched a four-goal game and added an assist in the second round-robin match against the Drummondville Voltigeurs, a 6–4 win, to secure the Rockets a berth in the tournament final.

Benn made the Stars' roster for the 2009–10 and scored his first NHL goal on October 11, 2009, against Roberto Luongo of the Vancouver Canucks. Benn tied the score 3-3 late in the game, but the Stars lost later in the shootout.

FULL ARTICLE AT WIKIPEDIA.ORG
This article is licensed under the GNU Free Documentation License.
It uses material from the Wikipedia article "Jamie Benn."