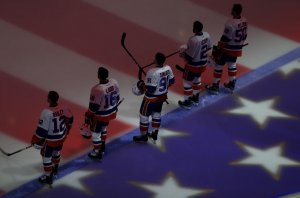 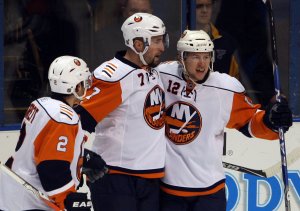 NHL // 1 year ago
Penguins juggling emotions as they return home to face Isles
It's pretty straightforward for the New York Islanders (5-4-1). They can extend their winning streak to three games, their point streak to four games and stay above .500 with a win Tuesday against Pittsburgh at PPG Paints Arena.

NHL // 3 years ago
NHL roundup: recap, scores, notes for every game played on March 27
TAMPA, Fla. -- Rookie Yanni Gourde got a steal and a breakaway goal with 35 seconds left in overtime as the Tampa Bay Lightning rallied from three goals down to beat the Chicago Blackhawks 5-4 in a thriller Monday night at Amalie Arena.

NHL // 3 years ago
NHL roundup: recap, scores, notes for every game played on March 9
TAMPA, Fla. -- The Tampa Bay Lightning, scrapping for every point in a wild-card logjam, picked up two points Thursday night with one of their more impressive wins, surprising the Minnesota Wild in a 4-1 victory at Amalie Arena.

NHL // 3 years ago
NHL roundup: recap, scores, notes for every game played on February 21
SAINT PAUL, Minn. -- All three forwards on the Blackhawks' top line scored on Tuesday as Chicago sent a message that the Central Division race might not be over yet. By beating the Wild 5-3, Chicago pulled within five points of Minnesota, which still sits atop the division.

NHL // 3 years ago
New York Islanders continue to give New York Rangers trouble with 4-2 win
NEW YORK -- For John Tavares, frustration turned to persistence in a span of mere seconds.

NHL // 3 years ago
Brock Nelson nets New York Islanders wild OT win over Toronto Maple Leafs
NEW YORK -- There have been bigger and more unexpected comebacks in sports over the last 48 hours than the one accomplished Monday night by the New York Islanders.

Bailey grew up in Bowmanville, Ontario playing AAA hockey for the Clarington Toros of the OMHA's Eastern AAA League. He was drafted in the first round of the OHL Priority selection by the Owen Sound Attack in May 2005.

Bailey was traded by the Attack to the Windsor Spitfires during the 2006–07 season.

FULL ARTICLE AT WIKIPEDIA.ORG
This article is licensed under the GNU Free Documentation License.
It uses material from the Wikipedia article "Josh Bailey."
Back to Article
/