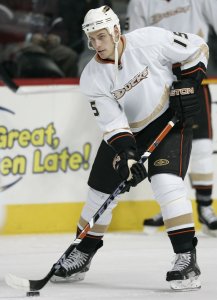 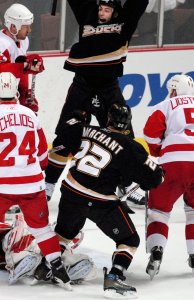 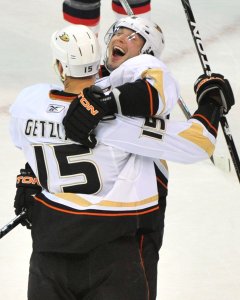 NHL // 1 year ago
Anaheim Ducks try to solve Dallas Stars in clash of inconsistent teams
The Anaheim Ducks and Dallas Stars carried their longest winning streaks of the season into December, but each delivered unforeseen duds last weekend.

NHL // 1 year ago
Capitals host Ducks in search of eighth straight win
The Washington Capitals won their first Stanley Cup last season, but it's been some time since they've enjoyed a run like this.

NHL // 1 year ago
Ducks look to halt slide, host Rangers
After earning their first road win nearly a month into the season, the New York Rangers will try to make it two in a row when they face the Anaheim Ducks on Thursday night at Honda Center.

NHL // 1 year ago
Ducks look to end four-game slide against Sharks
The Anaheim Ducks will try to avoid their longest losing streak in three years when they begin a four-game homestand against the San Jose Sharks on Sunday evening at Honda Center.

NHL // 2 years ago
Kane-led Sharks aim for 2-0 series lead vs. Ducks
The San Jose Sharks have an opportunity to assume a commanding lead in their first-round Stanley Cup Playoff Series against the Anaheim Ducks.

Ryan Getzlaf (born May 10, 1985) is a Canadian professional ice hockey player. He is a centre and the captain of the Anaheim Ducks of the National Hockey League (NHL). He grew up in Regina, Saskatchewan, Canada and he played Junior hockey with the Calgary Hitmen. He was drafted 19th overall in the 2003 NHL Entry Draft by the Mighty Ducks of Anaheim and he has been in the NHL since 2005.

Getzlaf started skating at the age of four and grew up playing numerous sports with his older brother Chris, who is currently a slotback for the Saskatchewan Roughriders of the Canadian Football League (CFL). While hockey was his main focus as a young athlete, Getzlaf also played organized volleyball, football and baseball. As a football player, Getzlaf played tailback. As a catcher playing baseball, he represented Saskatchewan at the 1998 peewee baseball nationals and earned several game MVP awards. He attended high school at Robert Usher Collegiate (since closed) in Regina, graduating in 2003.

Getzlaf was drafted into the Western Hockey League (WHL) by the Calgary Hitmen in the 3rd round, 54th overall, in the 2000 WHL Bantam Draft. After an 18-point rookie season with the Hitmen, he improved to 68 points in 2002–03. He was then drafted by the Anaheim Mighty Ducks in the 1st round, 19th overall, in the 2003 NHL Entry Draft. After being drafted, Getzlaf returned to the Hitmen and played two more seasons with the team, including a junior career-high 75 points in just 49 games in 2003–04. In his final season with the Hitmen, he suffered a concussion after colliding with Red Deer Rebels defenceman Dion Phaneuf – the first major injury of his career – but returned to tally 54 points in 51 games.

FULL ARTICLE AT WIKIPEDIA.ORG
This article is licensed under the GNU Free Documentation License.
It uses material from the Wikipedia article "Ryan Getzlaf."
Back to Article
/