By Dave Lozo, The Sports Xchange

Kevin Hayes and Michael Grabner also scored for the Rangers. David Desharnais and Nick Holden each had two assists.

Ondrej Kase had the goal for Anaheim. John Gibson made 28 saves in defeat.

Lundqvist was stellar in the first period, stopping all 16 shots he faced. His best save came against Rickard Rakell, who nearly beat Lundqvist on a breakaway but was unable to backhand the puck past the goaltender's blocker.

Carey sent the Rangers to the locker room at the first intermission ahead 1-0. He drove to the net and chipped a backhand saucer pass from Desharnais past Gibson with 45.5 seconds remaining in the period.

Hayes jumped on the Ducks 38 seconds into the second period, burying a wrist shot from the left faceoff circle past Gibson after Mats Zuccarello found him with a beautiful cross-ice pass in the offensive zone. The goal increased New York's lead to 2-0.

Carey earned his first career two-goal game with seven minutes remaining in the second period as he once again was set up for the goal by Desharnais. A cutting Carey took the pass in the slot and wristed the puck glove side to make it 3-0.

Kase spoiled Lundqvist's shutout bid with 5:17 remaining in the third period on Anaheim's 36th shot, taking a pass from Ryan Getzlaf and releasing a quick shot that squeezed through Lundqvist's legs to make it 3-1.

Grabner's 17th goal of the season with 3:23 remaining required video review. It was initially ruled that Rakell whacked the puck out of mid-air before it crossed the goal line, but replay showed the puck barely made it into the net for a 4-1 lead.

NOTES: Ducks D Brandon Montour was a healthy scratch for the first time this season. The 23-year-old has six goals and 16 points in 33 games this season. ... Ducks D Francois Beauchemin took Montour's place in the lineup and played 16:47. ... Rangers C Mika Zibanejad (concussion) played in his first game since Nov. 26. He had one shot in 13:32 of ice time. ... Rangers C Boo Nieves and D Steven Kampfer were scratched. ... Anaheim scratched D Korbinian Holzer and F Dennis Rasmussen. 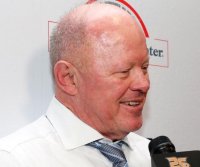