'Stranger Things,' 'Handmaid's Tale' to compete for Best Drama at the Emmy Awards 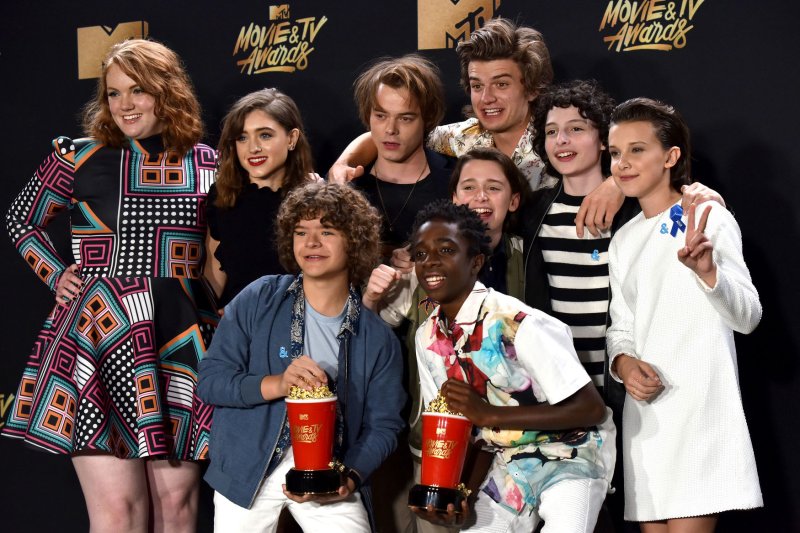 Cast of "Stranger Things" appears backstage with the Show of the Year award at the MTV Movie & TV Awards in Los Angeles on May 7. The series earned an Emmy nomination for Best Drama Thursday. Photo by Christine Chew/UPI | License Photo

Elisabeth Moss arrives at a photocall for the film "Top of the Lake: China Girl" during the 70th annual Cannes International Film Festival in France on May 23. File Photo by David Silpa/UPI | License Photo

"This is Us" actors Sterling K. Brown (L) and Mandy Moore appear onstage at the 48th NAACP Image Awards at the Pasadena Civic Auditorium on February 11. File Photo by Jim Ruymen/UPI | License Photo

Claire Foy appears backstage with her award for Outstanding Performance by a Female Actor in a Drama Series for "The Crown" during the the 23rd annual SAG Awards in Los Angeles on January 29. File Photo by Jim Ruymen/UPI | License Photo

Writer-producer Alan Yang (L) and actor-comedian Aziz Ansari appear backstage with their awards they won for Best Writing for a Comedy Series for "Master of None" during the 68th annual Primetime Emmy Awards in Los Angeles on September 18, 2016. File Photo by Christine Chew/UPI | License Photo

Ann Dowd arrives on the red carpet at the premiere of HBO's "The Leftovers" in New York City on June 23, 2014. File Photo by John Angelillo/UPI | License Photo

Jessica Lange arrives on the red carpet at the "Feud: Bette and Joan" on April 18, 2017 in New York City. File Photo by John Angelillo/UPI | License Photo

Shemar Moore and Anna Chlumsky read the names aloud Thursday morning. Winners will be celebrated at a gala at the Microsoft Theater in Los Angeles on Sept. 17, with Stephen Colbert serving as host. The ceremony is to air on CBS.

The nominees for Best Drama are Better Call Saul, The Crown, The Handmaid's Tale, House of Cards, Stranger Things, This is Us and Westworld.

Up for Best Comedy are Veep, Atlanta, black-ish, Master of None, Modern Family, Silicon Valley and Unbreakable Kimmy Schmidt.

Shortlisted for Best Actress in a Drama Series are Claire Foy for The Crown, Elisabeth Moss for The Handmaid's Tale, Robin Wright for House of Cards, Evan Rachel Wood for Westworld, Viola Davis for How to Get Away with Murder and Keri Russell for The Americans.

In the running for Best Actor in a Drama Series are Sterling K. Brown for This is Us, Anthony Hopkins for Westworld, Bob Odenkirk for Better Call Saul, Matthew Rhys for The Americans, Liev Schreiber for Ray Donovan and Milo Ventimiglia for This is Us.

The nominees for Best Actress in a Comedy Series are Ellie Kemper for Unbreakable Kimmy Schmidt, Allison Janney for Mom, Julia Louis-Dreyfus for Veep, Tracee Ellis Ross for black-ish, Lily Tomlin for Grace and Frankie, Jane Fonda for Grace and Frankie and Pamela Adlon for Better Things.

Mentioned for Best Actor in a Comedy Series are Jeffrey Tambor for Transparent, Aziz Ansari for Master of None, Donald Glover for Atlanta, Anthony Anderson for black-ish, William H. Macy for Shameless and Zach Galifianakis for Baskets.

Nominated for Best Limited Series are Big Little Lies, Fargo, Feud, Genius and The Night Of.

Competing for the title of Best TV Movie are Black Mirror, Dolly Parton's Christmas of Many Colors: Circle of Love, The Immortal Life of Henrietta Lacks, Sherlock: The Lying Detective and The Wizard of Lies.

The nominees for Best Actor in a Limited Series or TV Movie are Riz Ahmed for The Night Of, Benedict Cumberbatch for Sherlock: The Lying Detective, Robert De Niro for The Wizard of Lies, Ewan McGregor for Fargo, Geoffrey Rush for Genius and John Turturro for The Night Of.

Vying for Best Supporting Actor in a Drama are Jonathan Banks for Better Call Saul, David Harbour for Strangers Things, Ron Cephas Jones for This is Us, Michael Kelly for House of Cards, John Lithgow for The Crown, Mandy Patinkin for Homeland and Jeffrey Wright for Westworld.

A complete list of the contenders may be found at Emmys.com.

TV // 1 hour ago
'Wonder Years' reboot teaser hits some familiar notes
May 18 (UPI) -- ABC released the first teaser for its "The Wonder Years" reboot on Tuesday. Don Cheadle narrates a look back to growing up in the '60s. 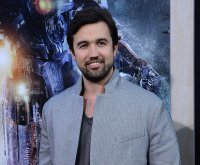 TV // 5 hours ago
'Feel Good' Season 2 coming to Netflix in June
May 18 (UPI) -- "Feel Good," a comedy-drama created by and starring Mae Martin, will return for a second season June 4 on Netflix.

TV // 5 hours ago
'Ragnarok' Season 2 trailer shows Magne prepare for battle
May 18 (UPI) -- "Ragnarok," a Norwegian-language fantasy series starring David Stakston, will return for a second season May 27 on Netflix.