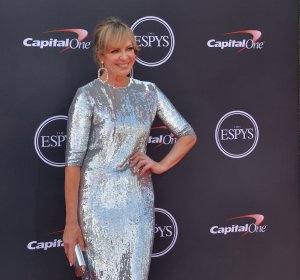 TV // 10 months ago
'The Crown,' 'The Mandalorian' lead Emmy nominations
The nominees for the 73rd annual Emmy Awards were announced on Tuesday, with "Ted Lasso," "RuPaul's Drag Race" and more receiving nominations.

TV // 1 year ago
Allison Janney speculates why 'Mom' is ending with Season 8
Allison Janney discussed "Mom" being canceled and the upcoming "West Wing" reunion for charity.

TV // 1 year ago
'Mom' to end with Season 8; finale set for May 6
The current, eighth season of "Mom" will be the Allison Janney-led sitcom's last on CBS.

Allison Brooks Janney (born November 19, 1959) is an American actress, best known for her role as C.J. Cregg on the television series The West Wing.

Janney was born in Dayton, Ohio, the daughter of Macy Brooks (née Putnam), a former actress and homemaker, and Jervis Spencer Janney, Jr., a real estate developer and jazz musician. She has an older brother, Jay, and a younger brother, Hal. She attended The Miami Valley School in Dayton, where she was named a distinguished alumna in 2004, and the Hotchkiss School in Connecticut. She then attended Kenyon College. At Kenyon, Janney studied under another Kenyon alum, Paul Newman. She went on to study drama at the Neighborhood Playhouse in New York and the Royal Academy of Dramatic Art in London. She attended The Neighborhood Playhouse the same years as actor Dylan McDermott.

Janney's first roles on television were as comedic foils on soap operas: she first played Vi Kaminski for a short time on As the World Turns, following up with a two-year stint as one of the Spaulding maids, Ginger on Guiding Light. In the spring of 1994, she appeared in the season finale of Law & Order, as a reluctant witness against a member of the Russian mob.

FULL ARTICLE AT WIKIPEDIA.ORG
This article is licensed under the GNU Free Documentation License.
It uses material from the Wikipedia article "Allison Janney."