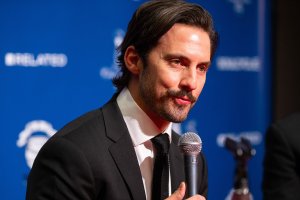 TV // 2 months ago
'This is Us' creator, stars celebrate series finale: 'It's been the trip of a lifetime'
"This is Us," a family drama starring Milo Ventimiglia and Mandy Moore, ended Tuesday after six seasons on NBC.

TV // 3 months ago
Mandy Moore 'threw up' after reading penultimate 'This is Us' script: 'It destroyed me'
Mandy Moore, who plays Rebecca Pearson on "This is Us," discussed the show's final episodes on "The Tonight Show starring Jimmy Fallon."

Entertainment News // 3 months ago
'This is Us' star Chris Sullivan expecting second child
Chris Sullivan, who plays Toby Damon on "This is Us," is expecting a baby girl with his wife, Rachel Sullivan.

Entertainment News // 5 months ago
Mandy Moore voices 'fierce' love for son Gus on his 1st birthday
"This is Us" star Mandy Moore posted a tribute to Gus, her son with Taylor Goldsmith, on his first birthday.

After his own short-lived WB series The Bedford Diaries, a recurring role as Meg Pryor's love interest on NBC's critically acclaimed American Dreams, and playing Rocky Balboa's son in the sixth and final installment of the Rocky series, Rocky Balboa, Ventimiglia's big break came in 2006 when he received the part of nurse-turned-superhero Peter Petrelli on NBC's Heroes. He can currently be seen on the big screen in Mark Neveldine and Brian Taylor's new film Pathology as Dr. Ted Gray. Filming of the third season of Heroes began May 1, 2008.

Ventimiglia was born in Orange County, California, the son of Carol (née Wilson) and Peter Ventimiglia. His father is Italian of Sicilian descent and his mother has Irish, English, Scottish, French, Cherokee, Indian and Blackfoot ancestry. His last name, Ventimiglia, is the name of a town of Ventimiglia in Liguria, Italy, which later gave its name to another city of Ventimiglia di Sicilia. The youngest of three children, he has two older sisters. He has explained in an interview with USA Today that his "sagging lip" is a result of dead nerve cells, which cause his lower lip to hang limp, predominantly on his right side, much like, incidentally, Sylvester Stallone, with whom he worked in Rocky Balboa.

FULL ARTICLE AT WIKIPEDIA.ORG
This article is licensed under the GNU Free Documentation License.
It uses material from the Wikipedia article "Milo Ventimiglia."