Xander Schauffele hits off the 1st tee during round 3 of the 117th U.S. Open. File photo by Kevin Dietsch/UPI
Picking up right where he left off after becoming the first rookie to capture the Tour Championship last month at East Lake in Atlanta, Schauffele was in the hunt almost all the way in his first start of the new season in the CIMB Classic. He started with scores of 65-67-67 in Malaysia before closing with a pedestrian even-par 72 to finish in a tie for third, seven strokes behind runaway winner Pat Perez. After tying for fifth in the U.S. Open at Erin Hills, Schauffele went on a run at the end of last season, with eight top-25 finishes in his last 10 tournaments, including his first PGA Tour victory in the Greenbrier Classic. That helped earn the 23-year-old the PGA Tour's Rookie of the Year Award for the 2016-17 season, but he has been on a fast track to stardom since claiming the 2011 California High School Championship and the 2014 California State Amateur Championship, and winning three times at San Diego State.
Advertisement
Advertisement 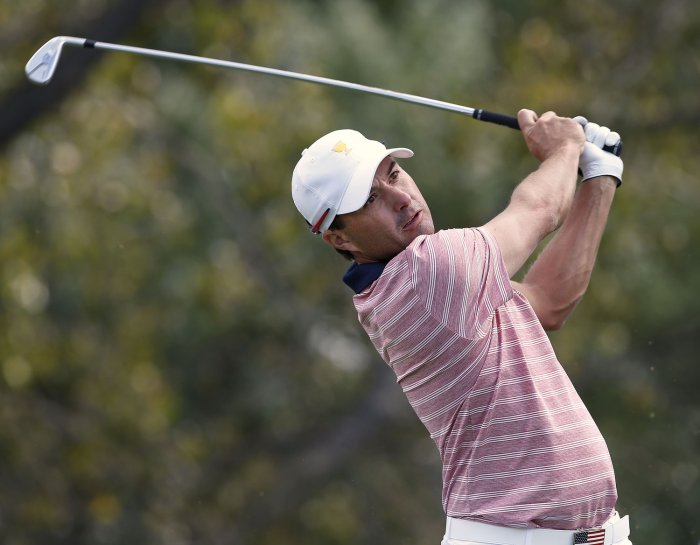 Justin Thomas of the United States hits a tee shot from the 12th hole on day two of the Presidents Cup. File photo by Rich Schultz/UPI
When he got to Malaysia last week for the CIMB Classic at TPC Kuala Lumpur, the 2016-17 Player of the Year admitted he wasn't quite ready physically and mentally to start the new season in the tournament he won the previous two seasons. After opening with so-so scores of 70-71, Thomas rebounded to shoot 69-67 on the weekend to salvage a tie for 17th and should be ready this week for the first regular season PGA Tour event in South Korea. Starting with his first major victory in the PGA Championship at Quail Hollow in August, he recorded four top-six finishes in his last five events of the season, including a victory in the Dell Technologies Championship. He finished one stroke behind Schauffele in the Tour Championship to walk off with the FedExCup. Thomas won five times in a Tiger Woods-like season and finished in the top 10 on 12 occasions in his breakthrough campaign, and seems to be on the verge of superstardom.
Advertisement

Jason Day of the International Team reacts to his shot from the fringe onto the 10th green on day two of the Presidents Cup. File photo by Rich Schultz/UPI
Following what mostly was a disappointing 2016-17 season, Day begins the new campaign, and although he plans to enjoy the sights on his first trip to Jeju Island, South Korea, he said his primary goal is to claim his first victory since the 2016 Players Championship. Slowed by injuries and his mother's battle with cancer last season, he slipped from No. 1 in the Official World Golf Rankings early in 2017 to No. 9. Day still had a season many players would envy, with five results in the top 10, including a best of solo second in the AT&T Byron Nelson. He came on strong at the end of the season, starting with a tie for ninth in the PGA Championship. During the playoffs Day tied for sixth in the Northern Trust, tied for 25th in the Dell Technologies Championship, finished solo fourth in the BMW Championship and tied for 17th in the Tour Championship to finish 18th in the FedExCup standings.
Advertisement

Paul Casey hits out of a trap on the 15th hole during the third round of the 2017 PGA Championship. File photo by Nell Redmond/UPI
Although he has been unable to break through for his first PGA Tour victory since his only one in the 2009 Shell Houston Open, Casey continues to knock on the door and he's good enough that he should break through sometime soon. He opened the new season with a 5-over-par 77 last week in the CIMB Classic, but then battled back with scores of 63-69-65 to finish in a tie for seventh at TPC Kuala Lumpur. That came after he finished in the top 10 on nine occasions last season, including solo sixth in the Masters, while also finishing 26th in the U.S. Open at Erin Hills, tying for 11th in the Open Championship at Royal Birkdale and tying for 13th in the PGA Championship at Quail Hollow. Then the Englishman went through the playoffs with a solo fifth in the Northern Trust before tying for fourth in the Dell Technologies, tying for 33rd in the BMW Championship and finishing fifth in the Tour Championship to wind up 11th in the FedExCup standings.
Advertisement

Marc Leishman of the International Team hits out of the rough in the morning foursomes matches at the Presidents Cup. File photo by John Angelillo/UPI
The second-highest ranked Aussie in the world at No. 16 -- yes, ahead of Adam Scott -- Leishman makes his first start of the new season after claiming two of his three career PGA Tour victories during the 2016-17 season. After winning only the 2012 Travelers Championship, earlier this year he captured the Arnold Palmer Invitational and the BMW Championship, claiming the third event of the playoffs by a whopping five strokes. Leishman had seven top-10 finishes and 16 in the top 25 during the season, including a tie for third in the Dell Technologies in week two of the playoffs on his way to winding up sixth in the FedExCup standings. He also played well in the last two majors of the year, tying for sixth in the Open Championship at Royal Birkdale and tying for 13th in the PGA Championship at Quail Hollow. Leishman also played better for the International team than his 0-3-1 record in the Presidents Cup might indicate, halving his singles match with Kevin Chappell.
Advertisement

Brendan Steele watches his tee shot on the 2nd hole during the third round of the 93rd PGA Championship. File photo by Brian Kersey/UPI
After winning the Safeway Open for the second straight year to open the new PGA Tour season two weeks ago, Steele followed that up with a solid tie for 13th after making the long plane flight to Malaysia for the CIMB Classic. He also tied for sixth in the Players Championship and tied for 13th in the U.S. Open at Erin Hills after dropping out of the top 10 with a 73 in the final round. That probably cost him a spot in the Tour Championship at East Lake in Atlanta last month, as he wound up three spots out of the top 30 in the FedExCup standings. Steele said he might have become complacent after his success early last season, which included ties for sixth in the SBS Tournament of Champions and the CareerBuilder Challenge, and he promised that it won't happen again this season. Steele, whose only other PGA Tour victory came in the 2011 Valero Texas Open, is the early FedExCup points leader and hopes to add to his margin this week in South Korea.
Advertisement 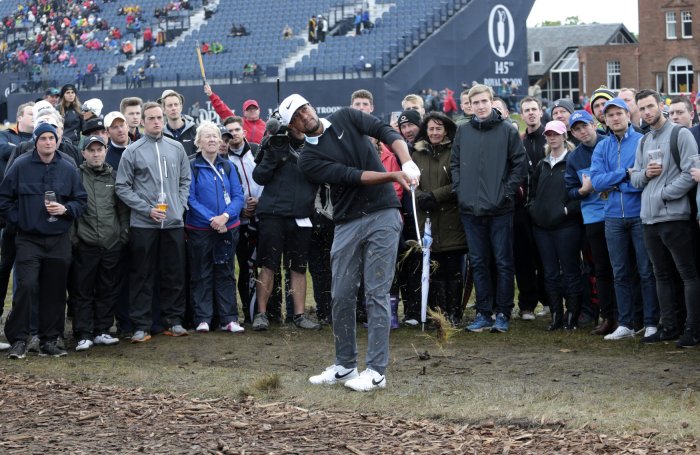 American golfer Tonty Finau chips out of the rough on the 1st hole at the 145th Open Golf Championship. File photo by Hugo Philpott/UPI
Coming back after a week off following his runner-up finish to open the season in the Safeway Open, Finau is riding a streak of three top-10 finishes after he tied for seventh in both the BMW Championship and the Tour Championship last month. Those results gave him eight results in the top 10 for the 2016-17 season and he wound up 19th in the FedExCup standings. In the Safeway Open, Finau made a strong run at adding to his only victory on the PGA Tour in the 2016 Puerto Rico Open, as he was tied for the lead with eventual winner Brendan Steele on the back nine in the final round. However, he stumbled to a double-bogey 6 on the 14th hole and finished two strokes behind Steele. Finau, who made a birdie on the third playoff hole to beat Steve Marino in Puerto Rico, also won the 2014 Stonebrae Classic on the Web.com Tour by three strokes, and is honing his raw talent, so more victories should be coming on the PGA Tour.
Advertisement

Keegan Bradley hits his tee shot on the par-4 8th hole during the final round of the Quicken Loans National. File photo by Pete Marovich/UPI
The 2011 PGA champion at the Olympic Club in San Francisco finally seems to be regaining that form after he finished solo second, four strokes behind Pat Perez last week in the CIMB Classic at TPC Kuala Lumpur in Malaysia. Bradley, the PGA Tour Rookie of the Year in 2011, hasn't won since the 2012 WGC-Bridgestone Invitational, but finally seems to be getting past the ban of his anchored putter at the beginning of last year. He was a winner often before that, with nine victories in his pro career, including the 2011 HP Byron Nelson Championship and the 2011 PGA Championship on the PGA Tour. Last season, Bradley recorded five top-10 finishes and 10 in the top 25 on the circuit, including a tie for fourth in the Farmers Insurance Open, a tie for fifth in the Quicken Loans National, a tie for sixth in the CIMB Classic and a tie for seventh in the Shriners Hospital for Children Open. He could be on the verge of making it all the way back to the top.
Advertisement

Pat Perez kicks his putter after missing a shot on the 17th green during round 2 of the 117th U.S. Open. File photo by Kevin Dietsch/UPI
Even though he said his ball-striking wasn't all that great, Perez claimed his second PGA Tour victory in as many seasons and third overall last week by four strokes over Keegan Bradley in the CIMB Classic at TPC Kuala Lumpur in Malaysia. He posted scores of 66-65-64-69 to finish at 24-under-par, and said a red-hot putter carried him to the victory. Perez was playing on a major medical extension when he came back from shoulder surgery last year, but regained his PGA Tour card when he won the 2016 OHL Classic at Mayakoba by two strokes over Gary Woodland, and now he has ensured his playing privileges on the circuit for two more seasons. He is playing the best golf of his career at the age of 41, posting six finishes in the top 10 last season, including a tie for second in the Wells Fargo Championship. Perez finished the playoffs strong with a tie for sixth in the Dell Technologies Championship, a tie for 12th in the BMW Championship and solo 16th in the Tour Championship to wind up 15th in the FedExCup standings.
Advertisement 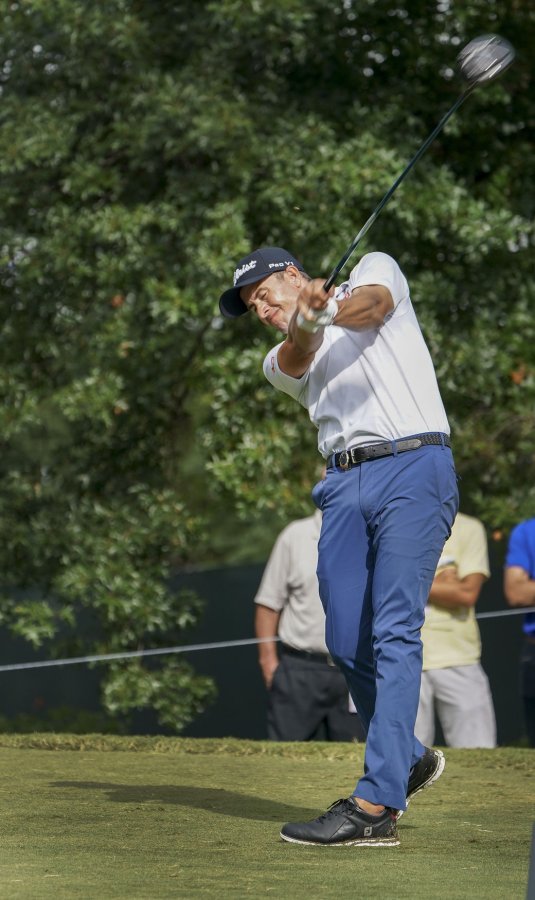 Adam Scott tees off the 16th tee box during the second round of the 2017 PGA Championship. File photo by Nell Redmond/UPI
Scott's plan to adjust his schedule in recent seasons in an effort to peak for the majors hasn't worked out so well. The 2013 Masters champion has finished in the top 10 only once in his last nine starts in the Grand Slam events -- a tie for ninth at Augusta National last year -- and his performance during the regular season hasn't been up to his standards either. Scott played only 16 times during the PGA Tour regular season last season, posting four finishes in the top 10, including a tie for sixth in the Players Championship. He didn't make it past the second round of the playoffs after missing the cut in the Dell Technologies Championship and finished 79th in the FedExCup point standings. Scott played well early last season, finishing in the top 15 in his first four outings, but that didn't lead to strong results in the majors after the Masters, including a missed cut in the U.S. Open and a tie for 61st in the PGA Championship.
Advertisement