Golf // 2 years ago
British Open: Zach Johnson, Kevin Kisner atop leaderboard
American's Zach Johnson and Kevin Kisner lead the field at the 2018 Open Championship after the second round Friday in Scotland. 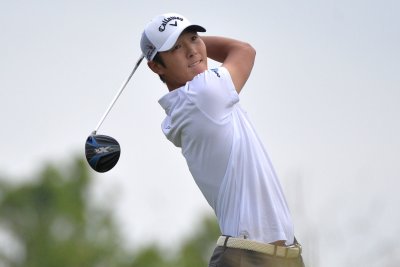 Golf // 4 years ago
2017 Players Championship Leaderboard Update: Holmes, Stanley share one-stroke lead
If one thing is for certain when even the best golfers on the planet try to tackle the famed Stadium Course at TPC Sawgrass, it's that nothing is a sure thing.

Perez was born in Phoenix, Arizona and is of Mexican American descent. He experienced his first PGA Tour victory in 2009 at the Bob Hope Classic. He has finished second twice, including a memorable runner-up result at Pebble Beach when his back-nine collapse led him to attempt to break a club over his leg.

He has featured in the top 100 of the Official World Golf Rankings.

FULL ARTICLE AT WIKIPEDIA.ORG
This article is licensed under the GNU Free Documentation License.
It uses material from the Wikipedia article "Pat Perez."
Back to Article
/