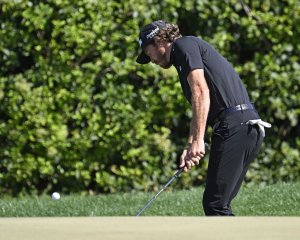 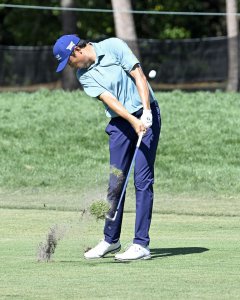 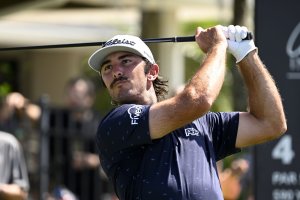 Sports News // 3 months ago
Masters golf: Scottie Scheffler leads at 9-under par, Tiger Woods struggles in Round 3
Tiger Woods struggled with consistency Saturday during Round 3 of the 2022 PGA Masters tournament, finishing 6-over par in a performance that likely placed the 15-time winner too far down to remain in contention.

Sports News // 5 months ago
Golf, basketball, NFL Combine among weekend sports events
The Arnold Palmer Invitational golf showdown, dozens of college basketball and NBA games and the 2022 NFL Scouting Combine are among the sports events to watch this weekend.

As far as trying to compete in a major championship such as the Open and other tournaments, this is it. I'm through doing that. I will not be doing it anymore

It's not fun when you play as poorly as I'm playing, and of course, as you see, my tournaments are really getting down to the very few

The local people have, for all my life, been extremely supportive of me and my golf

I think those (troops) over there look to see what we're doing and I think that when they get up in the morning, they look to see who won the golf tournament or the baseball or basketball game

Arnold Daniel Palmer (born September 10, 1929) is an American golfer who is generally regarded as one of the greatest players in the history of men's professional golf. He has won numerous events on both the PGA Tour and Champions Tour, dating back to 1955. Nicknamed "The King," he is one of golf's most popular stars and its most important trailblazer because he was the first star of the sport's television age, which began in the 1950s. He is part of "The Big Three" in golf along with Jack Nicklaus and Gary Player who are widely credited with popularizing and commercialising the sport around the world.

Palmer won the PGA Tour Lifetime Achievement Award in 1998, and in 1974 was inducted into the World Golf Hall of Fame.

Palmer was born in Latrobe, Pennsylvania. He learned golf from his father, Deacon Palmer, who was head professional and greenskeeper at Latrobe Country Club, allowing young Arnold to accompany his father as he maintained the course. He attended Wake Forest University, on a golf scholarship. He left upon the death of close friend Bud Worsham, and enlisted in the Coast Guard, where he served for three years and had some time to continue to hone his golf skills. Palmer gathered himself, and returned to competitive golf. His win in the 1954 U.S. Amateur made him decide to try the pro tour for a while, and he and new bride Winifred Walzer (whom he had met at a Pennsylvania tournament) traveled the circuit for 1955. Palmer won the 1955 Canadian Open in his rookie season, and raised his game systematically for the next several seasons.

FULL ARTICLE AT WIKIPEDIA.ORG
This article is licensed under the GNU Free Documentation License.
It uses material from the Wikipedia article "Arnold Palmer."