1. Justin Thomas, United States -- After claiming the PGA Championship for his first major title, Thomas said he barely had a chance to celebrate because the playoffs started two weeks later. He's dealing with the same type of situation again because he captured the FedExCup, helped the United States retain the Presidents Cup and was voted PGA Tour Player of the Year within the last few weeks. Thomas has made the long flight to Malaysia and this week will be trying to win the CIMB Classic for the third consecutive year. He sank a six-foot par putt on the last hole to claim his first PGA Tour victory by one stroke over Adam Scott of Australia two years ago, and repeated at TPC Kuala Lumpur last October, beating Hideki Matsuyama of Japan by two shots. Thomas, ranked fourth in the world, has shown he can go very low on the course, shooting a tournament-record 11-under-par 61 in round two in 2016, and posting bookend 64s en route to the first of his five victories last year.

2. Hideki Matsuyama, Japan -- Until fading late last season, Matsuyama was playing better than anyone else on the PGA Tour, leading the FedExCup standings most of the way thanks to three victories and three runner-up results before finishing eighth in the final point standings. He started his 2016-17 season by finishing second, three strokes behind Justin Thomas, in the CIMB Classic and has finished in the top 25 in all four of his appearances at TPC Kuala Lumpur. Matsuyama tied for 25th in Malaysia three years ago, followed that with a tie for 21st the following year and finished solo fifth in 2016 before his runner-up showing last year. In 16 rounds on the West Course at Kuala Lumpur, he is a cumulative 55-under-par and has failed to equal or better par only once. Matsuyama will defend his title in two weeks at the WGC-HSBC Champions in China, and he followed that up later in his breakthrough season on the PGA Tour with victories in the Waste Management Phoenix Open and the WGC-Bridgestone Invitational.

3. Paul Casey, England -- Even though he couldn't break through for his second PGA Tour victory, Casey was among the hottest players through the playoffs last month, posting three top-10 results in the four postseason tournaments. He finished solo fifth in The Northern Trust, tied for fourth in the Dell Technologies Championship, and after slipping to a tie for 33rd in the BMW Championship, he was solo fifth in the Tour Championship at East Lake in Atlanta. Casey, who hasn't won on the PGA Tour since the 2009 Shell Houston Open, recorded nine finishes in the top 10 last season and wound up 11th in the final FedExCup point standings. He is playing in the CIMB Classic for the fourth consecutive year, tying for 37th in his debut, followed by a tie for 24th and a tie for 21st last year. Casey has played well at TPC Kuala Lumpur at 28-under-par for 12 rounds, but the problem has been he simply didn't go low enough to keep up with the leaders.

4. Xander Schauffele, United States -- The PGA Tour's Rookie of the Year for the 2016-17 season is coming off his dramatic victory in the Tour Championship in Atlanta, where he holed a three-foot par putt on the final hole to hold off FedExCup champion Justin Thomas by one stroke. The 23-year-old Schauffele, the first rookie to win the finale at East Lake, also captured the Greenbrier Classic by one stroke over Robert Streb earlier in the season and finished third in the final point standings. He became the sixth multiple winner during the season, joining Thomas, Jordan Spieth, Dustin Johnson, Hideki Matsuyama of Japan and Marc Leishman of Australia. Schauffele, who is making his first appearance in the CIMB Classic, showed he will be a player to watch in the major championships after tying for fifth in the U.S. Open at Erin Hills and tying for 20th in the Open Championship at Royal Birkdale, his first two appearances in the Grand Slam events, before he missed the cut in the PGA Championship at Quail Hollow.

5. Brendan Steele, United States -- Following his second straight victory in the Safeway Classic in California, Steele hopped on a jet for the long trip to Malaysia to play in the CIMB Classic for the fourth time in five years. After winning at Silverado last season, he kept it going at on the West Course at TPC Kuala Lumpur by starting with scores of 67-67-69 to head to the final round in the top 10 before running out of steam with a 73 that left him in a tie for 26th. Steele shot 8-under-par 63 in the second round two years ago in Malaysia and was tied for the lead with eventual champion Justin Thomas entering the final round, when he shot 68 to finish two strokes back in a tie for third. He tied for 25th in his first appearance in the tournament three years ago. Steele, whose only other PGA Tour victory came in the 2011 Valero Texas Open, rode his opening victory last year to his best season on the PGA Tour and missed making the 30-man field for the Tour Championship by only three spots.

6. Anirban Lahiri, India -- With 18 victories in his career, the 30-year-old Lahiri figures to become the second player from India to win on the PGA Tour, after Arjun Atwal captured the 2010 Wyndham Championship. It almost happened last year in the Memorial Tournament, when he bounced back from an opening 2-over-par 74 and shot 65 in the final round to wind up two strokes behind Jason Dufner in a tie for second. Lahiri impressed Nick Price enough that he landed a spot in the International team as a Captain's Pick for the Presidents Cup at Liberty National, where he posted a solid 1-1-1 record, including a halve of his singles match with Kevin Kisner. Lahiri is back in Asia this week for his fifth appearance in the CIMB Classic, in which he held the lead a year ago after starting with 66-66-65 before shooting 72 in the last round to tie for third, four strokes behind winner Justin Thomas. He does have a victory in Malaysia, in the 2015 Maybank Malaysian Open.

7. Thomas Pieters, Belgium -- Considered a rising star on the European Tour with three victories in the last two seasons, the 25-year-old Pieters has decided to make the jump to the PGA Tour and the CIMB Classic will be his first event as an official member. He played in 12 events on the U.S. Tour last season and recorded four finishes in the top 10, the most impressive a tie for fourth in his first trip to the Masters. The 6-foot-5 Pieters also tied for second in the Genesis Open, finished solo fourth in the WGC-Bridgestone Invitational and tied for fifth in the WGC-Mexico Championship. He broke through on the European Tour in 2015 by winning the Czech Masters and the KLM Open, then added to his total by claiming the 2016 Made in Denmark. Pieters should make a smooth transition to playing more in the U.S. Tour since he played college golf at Illinois and captured the 2012 NCAA Individual Championship and the 2013 Big Ten Championship. This will be his debut in the CIMB Classic.

8. Kevin Na, United States -- Seemingly heading for his third top-10 result in five starts after shooting 5-under-par 66 in the third round of the Safeway Open, Na struggled to a 77 in the wind on Sunday in the final round and plummeted to a tie for 53rd. He was coming off a tie for fourth in the Wyndham Championship and a tie for sixth in the Dell Technologies Championship recently, and shot 63 in his final round of last season in the BMW Championship. Na hopes to get back on track in his fourth start in the CIMB Championship, which he could have won twice. Three years ago, he was tied for the lead with eventual champion Ryan Moore heading to the final round, but closed with a 2-under-par 70 to finish three strokes back in a tie for second. In 2015, Na posted four scores of 67 or better and tie for third, two shots behind champion Justin Thomas. He wasn't quite as good last year, when he tied for 29th.

9. Adam Hadwin, Canada -- Looking for more after claiming his first PGA Tour victory by one stroke over Patrick Cantlay in the Valspar Championship last March in a breakthrough season, Hadwin will make his first start of the new season in the CIMB Classic. He made his first trip to TPC Kuala Lumpur last season and recorded a very respectable tie for 21st by playing the middle rounds in 69-67. Hadwin, who has 12 pro victories including two on the Web.com Tour and two more on the Canadian Tour, came close again last year when he finished solo second in the CareerBuilder Challenge. He also tied for fifth in the WGC-Bridgestone Invitational, finished sixth in the Arnold Palmer Invitational and tied for 10th in the OHL Classic at Mayakoba. Hadwin, who earned his PGA Tour card when he led the 2013 Web.com Tour money list, made it all the way to the Tour Championship for the first time last month, and finished 23rd to wind up 26th in the FedExCup standings.

10. Gary Woodland, United States -- Even though he hasn't won on the PGA Tour since 2013, it's not for lack of effort, because Woodland has finished second on seven occasions since. Two of those runner-up results came in this week's tournament, the CIMB Classic, in which Ryan Moore beat him out both times. Three years ago, Moore bested him with a birdie on the first playoff hole, and a year later Woodland tied for second, three strokes back. Last season, the long-hitting Woodland finished second in the OHL Classic at Mayakoba and tied for second in the Honda Classic among five top-10 results and nine in the top 25, which carried him all the way to the Tour Championship. He finished solo 19th at East Lake Golf Club in Atlanta and wound up 28th in the final FedExCup standings. Woodland's two PGA Tour victories came in the 2011 Transitions Championship and the 2013 Reno-Tahoe Open, and his most impressive runner-up result was losing to Rory McIlory, 4 and 2, in the final of the 2015 WGC-Match Play Championship. 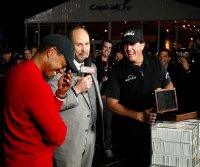