By
Laurence Heinen, The Sports Xchange

Brian Elliott stopped 24 shots as the Calgary Flames recorded a 4-2 win over the Colorado Avalanche at the Scotiabank Saddledome. File Photo by Bill Greenblatt/UPI | License Photo

CALGARY, Alberta -- The rough start that Sean Monahan and the Calgary Flames endured is a distant memory.

Monahan had his most productive game of the season on Monday with a goal and three assists to lead the Flames to a 4-2 win over the Colorado Avalanche at the Scotiabank Saddledome.

"It's a big time of the year," said Monahan, who had just four goals and two assists in his first 16 games of the season while the Flames started off 5-10-1. "We've been talking about that the last little while. We're trying to step up and do whatever we can to help this team. Right now when things are rolling, good things happen."

Monahan's linemates, Johnny Gaudreau and Micheal Ferland, also had strong outings with a goal and an assist each for the Flames (43-29-4), who can clinch a playoff berth by beating the Los Angeles Kings in regulation at home on Wednesday.

"We know how close we are," said Gaudreau. "You can tell the guys are excited about it too. We've still got a little bit more the rest of the season. We have to be strong the last week and a half, two weeks. But we're definitely excited."

Troy Brouwer also scored for Calgary, and goaltender Brian Elliott stopped 24 shots for his 25th win of the season and 14th in his past 16 games.

"I'm proud of the guys and the spot they've put themselves in," Calgary coach Glen Gulutzan said. "A lot of hard work went into that and now we've got to finish it off."

Sven Andrighetto scored twice for the Avalanche (20-52-3), who have lost six straight games and nine in a row on the road.

"It was a good effort," said Andrighetto in regards to the third period when the Avalanche outshot the Flames 14-7. "We started shooting pucks in the third and crashed the net, put some pressure on them."

It doesn't get any easier for the Avalanche, who return home to Denver to face the league-leading Washington Capitals (49-17-8) on Wednesday.

"We're just trying to talk to them about being loose and playing like we have nothing to lose and making sure that we're creating enough opportunities," said Colorado coach Jared Bednar. "All in all the third period is encouraging, but we've got to be better in the first two."

Calgary had an early chance on the power play when former Flames center Joe Colborne was sent to the penalty box for tripping Gaudreau just 23 seconds into the game.

Monahan capitalized on the man advantage at 1:30 when his shot from the slot deflected off Colorado defenseman Erik Johnson's skate and past Calvin Pickard (23 saves).

The Avalanche had two power-play opportunities early in the second period, including a two-man advantage for nine seconds, but weren't able to get any pucks past Elliott.

The Flames went up 2-0 at 4:23 when Ferland lifted a shot over Pickard's blocker for his 15th goal of the season. Gaudreau drew an assist on the play for his 200th NHL point.

Andrighetto broke Johnson's shutout bid with a power-play goal at 3:06 of the third period. Although Johnson's shot from the point missed the net, it bounced off the boards and right out front to Andrighetto, who swatted it past Elliott.

The Flames answered right back with a power-play goal of their own at 4:58 when Brouwer took a pass from Monahan and wired a shot to the top corner, glove side past Pickard for his third goal in four games.

"Pucks have been finding me a little bit lately and I've been working hard to get into good scoring and good shooting areas," said Brouwer, who has three goals in his past four games. "I pride myself on being an impact player at this time of the year."

Andrighetto pulled the Avalanche within one at 18:06 when he fired a long shot past Elliott with Pickard on the bench for an extra attacker.

Gaudreau then scored into an empty net with 3.4 seconds left.

-- Flames RW Troy Brouwer played his first NHL game against the Avalanche on Dec. 23, 2006, when he was a member of the Chicago Blackhawks. Brouwer also scored his first NHL goal for the Blackhawks against Colorado on Nov. 3, 2008. 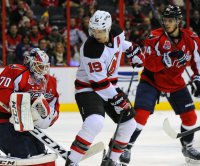