NHL // 4 years ago
Anaheim Ducks rally to take 3-0 series lead over Calgary Flames
CALGARY, Alberta -- Playing in his 100th NHL playoff game, Corey Perry had belief that the Anaheim Ducks could battle back from a three-goal deficit against the Calgary Flames.

NHL // 4 years ago
Los Angeles Kings keep Calgary Flames from clinching playoff spot
CALGARY, Alberta -- Jarome Iginla has had a lot of great games in Calgary, but Wednesday's performance against his former team will go down as one he'll never forget. 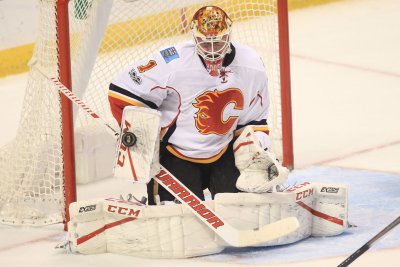 NHL // 4 years ago
Back from illness, Brian Elliott leads Calgary Flames past Dallas Stars
CALGARY, Alberta -- Brian Elliott got back in his routine on Friday, won the battle with the flu and beat the Dallas Stars.

NHL // 4 years ago
Calgary Flames jump out early to beat New York Islanders
CALGARY, Alberta -- The Calgary Flames are hitting their stride at the right time of the season.

Wideman was drafted from the London Knights of the Ontario Hockey League in the 8th round, 241st overall by the Buffalo Sabres in the 2002 NHL Entry Draft. He started the 2005–06 NHL season with the Peoria Rivermen of the American Hockey League but eventually got the call up to the St. Louis Blues and made his NHL debut on November 9, 2005 at Columbus.

Wideman played in 55 games for the Blues during the 2006–07 NHL season before being traded from the Blues to the Boston Bruins on February 27, 2007 for Brad Boyes. He finished with 25 points on the season.

FULL ARTICLE AT WIKIPEDIA.ORG
This article is licensed under the GNU Free Documentation License.
It uses material from the Wikipedia article "Dennis Wideman."
Back to Article
/