By
Laurence Heinen, The Sports Xchange 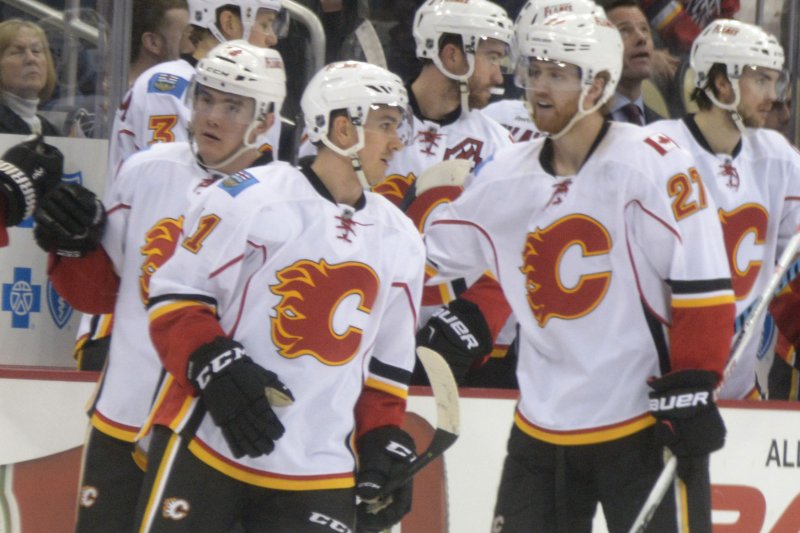 CALGARY, Alberta -- The Calgary Flames did not let their second chance slip away.

The Flames scored three goals in the second period en route to clinching their first playoff berth in three seasons with a 5-2 win over the San Jose Sharks at the Scotiabank Saddledome on Friday night.

"It's just excitement -- a little bit of relief too, to get it over with," said Calgary captain Mark Giordano, whose team missed out on a chance to clinch Wednesday when they lost 4-1 at home to the Los Angeles Kings. "You don't want to go into the last couple having to get it. It was nice to get it over with. Now there's excitement."

After Johnny Gaudreau opened the scoring in the first period, Sean Monahan, Matt Stajan and Alex Chiasson added goals in the second to send the Flames (44-30-4) on their way.

"Everyone's in the playoff mode right now," said Chiasson, who also had an assist. "For us, it's to go one game at a time, make sure our game is sharp, and we can still do some more damage here coming up in the standings. I think that's going to be our goal going forward."

Sam Bennett had an empty-net goal to go with an assist and goalie Brian Elliott made 36 saves for the Flames, who moved to within one point of the Sharks for third place in the Pacific Division.

"We didn't play probably our best game last game and I think a lot of guys wanted to come out and really show something," said Elliott. "We have a lot left in the tank."

Marc-Edouard Vlasic and Melker Karlsson scored for the Sharks (43-28-7), who have just one win in their past nine games after going 7-2-0 in the previous nine.

"You've just got to work through it," said Sharks defenseman Brent Burns. "We're working now and it's not working. You've got to just push through. We know we're a great team. We've got to get back there. Who knows? We've got to see a witch doctor or something, I think. We'll see."

Martin Jones stopped 18 of 22 shots he faced through two periods before being replaced by Aaron Dell, who made 12 saves in the third period.

Karlsson pulled San Jose to within two goals at 13:06 of the third when he redirected a pass from Joe Pavelski past Elliott, who made a nice glove save 20 seconds later to deny Kevin Labanc.

"If I have an off night or someone else has an off night, it catches up with us for whatever reason that's been burning us," said Pavelski. "It's a little frustrating. You don't go through a stretch like this and you're happy with what you're doing.

"There's better hockey out there for us. When a goal goes in -- one or two -- you've got to regroup quick and attack and build on momentum."

The Sharks, who dropped a 3-2 road decision the night before to the Edmonton Oilers, carried the majority of the play in the early going of the first period but weren't able to get any pucks past Elliott.

"On a back-to-back, we come out (and) we get going pretty early, it feels like," said Pavelski. "In the second period, they pull away from us, which is the way it's been. It's been one or two plays."

Gaudreau put the Flames up 1-0 at 12:26 when he tipped a pass from Sam Bennett past Jones. Gaudreau skated into the San Jose zone before dropping a nifty back pass to Bennett and driving straight to the net for an easy tap-in goal.

Monahan scored a power-play goal at 3:39 of the second to extend Calgary's lead before Vlasic snapped a shot from the slot past Elliott at 8:25.

Stajan swatted a rebound past Jones at 12:38 before Chiasson put the Flames up 4-1 at 17:09. Chiasson took a pass from Kris Versteeg and drove to the net before backhanding a point-blank shot over Jones' shoulder and into the top corner. 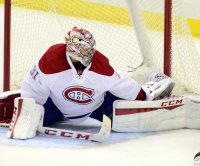