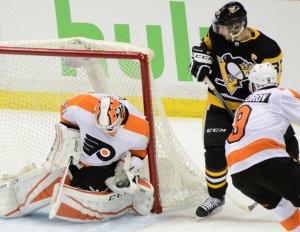 NHL // 3 years ago
Devils seek cure to road woes against Flyers
The New Jersey Devils polished off the Pittsburgh Penguins to boost their home record to 6-1-1.

Sports News // 3 years ago
Streaking Flyers host Panthers
Back on Oct. 16, the Flyers blew a three-goal lead but managed to pull out a 6-5 shootout victory over the Florida Panthers in Philadelphia.

NHL // 3 years ago
Flyers face Coyotes, aim to build off West success
Despite their revolving door in goal, the Philadelphia Flyers are coming off a 3-0-1 western swing as they return home for the back end of a home-and-home set with the Arizona Coyotes Thursday night.

NHL // 3 years ago
Coyotes look to remain hot at home vs. Flyers
GLENDALE, Ariz. -- The Arizona Coyotes' homestand couldn't be any better. The Philadelphia Flyers' road trip could get a whole lot better Monday night.

Brian Elliott (born April 9, 1985) is a Canadian ice hockey goaltender currently playing for the Colorado Avalanche of the National Hockey League. He was drafted by the Senators in the ninth round of the 2003 NHL Entry Draft, 291st overall. He went on to play 4 seasons for the University of Wisconsin–Madison.

Elliott grew up in Newmarket, Ontario playing minor hockey for the Newmarket Redmen AA and the York-Simcoe Express AAA teams in the OMHA. Elliott was not drafted by an OHL team in 2001 and returned to York-Simcoe for Major Midget the following season. After a good season in the Eastern AAA League, Elliott was signed by the Ajax Axemen Jr.A. team in 2002-03.

After a standout season with the Ajax Axemen in 2002–03, Elliott was drafted late in the 2003 NHL Entry Draft by the Ottawa Senators. The second last player selected (291st overall), Elliott was not expected to progress to the NHL. He would spend four seasons with the University of Wisconsin–Madison, serving as a backup for his first two seasons before securing the starting goaltender position in 2005–06. He was selected as a finalist for the 2005–06 Hobey Baker Memorial Award, collecting eight shutouts in 33 appearances, and leading the Badgers to the 2006 NCAA National Championship. He was signed by the AHL's Binghamton Senators on March 23, 2007, and played in eight games with Binghamton near the end of the 2006–07 season.

FULL ARTICLE AT WIKIPEDIA.ORG
This article is licensed under the GNU Free Documentation License.
It uses material from the Wikipedia article "Brian Elliott."