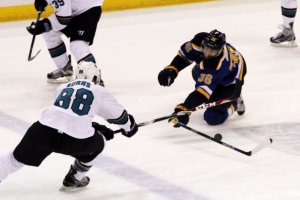 NHL // 5 years ago
Anaheim Ducks rally to take 3-0 series lead over Calgary Flames
CALGARY, Alberta -- Playing in his 100th NHL playoff game, Corey Perry had belief that the Anaheim Ducks could battle back from a three-goal deficit against the Calgary Flames.

Sports News // 5 years ago
Ryan Getzlaf's good bounce goal gives Anaheim Ducks 2-0 series lead
ANAHEIM, Calif. -- With the help of a fortunate bounce, Anaheim center Ryan Getzlaf again captained his team to a victory over the visiting Calgary Flames, scoring the game-winning goal late in the third period to lift the Ducks to a 3-2 victory on Saturday night.

NHL // 5 years ago
NHL roundup: recap, scores, notes for every game played on March 27
TAMPA, Fla. -- Rookie Yanni Gourde got a steal and a breakaway goal with 35 seconds left in overtime as the Tampa Bay Lightning rallied from three goals down to beat the Chicago Blackhawks 5-4 in a thriller Monday night at Amalie Arena.

NHL // 5 years ago
NHL roundup: recap, scores, notes for every game played on March 21
BUFFALO, N.Y. -- Nick Bonino scored with 5:29 remaining to lead the Pittsburgh Penguins to a 3-1 win over the Buffalo Sabres on Tuesday night.

Brouwer was drafted 214th overall in the 2004 NHL Entry Draft by the Chicago Blackhawks. Brouwer spent his major junior career in the Western Hockey League (WHL) with the Moose Jaw Warriors. In his final year with the Warriors in 2005–06, he was named team captain and led Moose Jaw with a team-high 49 goals and 53 assists. Brouwer's 102 points also led the league in points, by which he was awarded the Bob Clarke Trophy.

Brouwer was assigned to the Norfolk Admirals, the Blackhawks' American Hockey League (AHL) affiliate in 2006–07, where he recorded 79 points and was named to the AHL All-Rookie and Second All-Star Team. He also made his NHL debut that season, playing 10 games with the Blackhawks. As a Blackhawk, Brouwer joined three of his previous minor hockey teammates, Colin Fraser, Brent Seabrook and Andrew Ladd from his Vancouver team, the Pacific Vipers.

FULL ARTICLE AT WIKIPEDIA.ORG
This article is licensed under the GNU Free Documentation License.
It uses material from the Wikipedia article "Troy Brouwer."