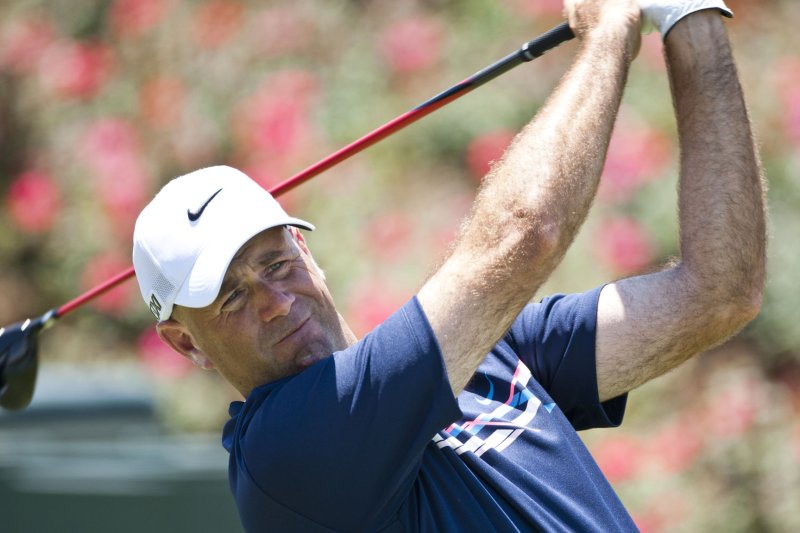 The RBC Heritage provides PGA Tour players and their family a relaxing and fun, yet competitive week on the shores of Calibogue Sound at Hilton Head Island, S.C., right after the Masters.

It's even more special for two-time Heritage winner Stewart Cink this week.

Cink's wife, Lisa, was diagnosed with Stage 4 breast cancer, which caused him to virtually drop off the circuit when she began nine rounds of chemotherapy that continued until October.

With Lisa able to travel to tournaments again, Cink has played 13 times since the start of the 2016-17 season.

"It's just good to have her out here," said Cink, who has won six times on the PGA Tour, including the 2009 Open Championship at Turnberry, where he beat Tom Watson in a playoff.

"Any guy is going say it's nice to have their wife or girlfriend out, they're traveling with them. Little bit special to have Lisa out. I'm glad she's here."

The 43-year-old Cink admittedly had fallen into a bit of a mid-career malaise, as his only major title was the last time he won, and he wasn't even contending very often.

He credits Lisa with rekindling his competitive fire.

"She's just inspired me to fight harder," said Cink, who missed the Masters for the second straight year but didn't let it bother him. "I've played out here now for 21 years, this is my 21st. I got a little bit complacent. I didn't know I was getting complacent. When I saw Lisa fight through, when I've seen her fighting through, you know, I just felt like why can't I also fight a little bit more and dig a little deeper.

"So just inspired me to do what it takes, and I don't really think I was quite doing what it took, although I thought I was. I had to really do some soul-searching myself, and I found that I could do a little bit more. And so I've just kind of made golf a little bit more fun. I've made it more fun because I'm working hard, in a way I'm really pursuing it in a different way than I was before. She's inspired me in that way. ...

Even though Cink has finished in the top 10 only once this season, when he tied for 10th in the RSM Classic after opening with a career-best 8-under-par 62 in October right after Lisa got a favorable report from doctors, he has missed the cut only twice in those 13 tournaments and finished in the top 30 on nine occasions, including five in a row.

Nothing really to write home about, but he's got a different perspective.

"I've played decently solid over the last month or two and it really extended back even to maybe like the last six months," said Cink, who started well in the Shell Houston Open in his most recent start, but played the weekend in 73-73 to tie for 23rd. "I've had some good tournaments.

"Being out here inside the ropes is sort of like my -- almost like an escape, even though I also take time away from the game. Doesn't really make sense, does it? Getting into the rhythm of a round and computing yardages and figuring out shots and executing, and starting all that over again is kind of an escape route for me.

"It is for (Lisa), too, a little bit. She has her own way of dealing with the rounds. It's a different kind of compartmentalization. ... It doesn't matter, the 76s or the 66s feel kind of the same and that's what I'm after."

Said Brandt Snedeker: "I don't think any guy out here is not rooting for Stewart. We all want to see him do well, and, hopefully, see Lisa hug him on the 18th green when he wins again. That would be a special moment."

In 2002, Cink beat Tom Lehman by two strokes when he closed with a 7-under-par 64,and four years later he turned back Ted Purdy with a six-foot birdie on the fifth playoff hole after coming from nine shots back with a 64.

"It's quite special," Cink said of Harbour Town. "It's always one of my favorites, if not my very favorite tournament of the year. It's such a relaxed field. The golf course is really unique and special. It's like the anti-Augusta, flat, everything is very small and closed in, whereas Augusta is so large and rolling hills.

"When you come here the intensity just seems to melt away and enables you to really relax and be at your best. That's the way I see it. It means different things to different people. In my case I think I like the relaxation of it.

"This is a tournament that has got great visibility on television. The lighthouse, the 18th hole are some of the most well-known and famous holes that you see anywhere. And it looks great on TV. The players all love it. They rave about it. It's a really good fit. It's been here a long time.

And the Cinks can appreciate it even more than ever this week.