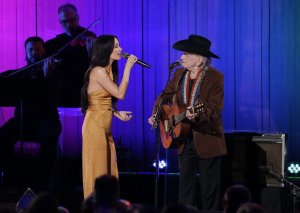 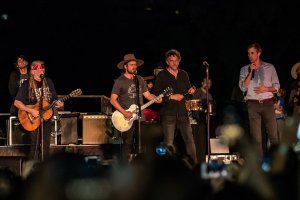 We might not know the full extent of the damage yet, but we do know that family farmers will need our help to rebuild and to get back on the land quickly, growing good food for all of us

Farm Aid is coming to New York because your enthusiasm for family farm food is keeping family farmers on the land. We are thankful to Mayor Bloomberg, the City Council and the many activists here who are leading efforts so that every New Yorker has access to more food from family farms

The Farm Aid concert brings us all together to support family farmers, one of our most valuable resources

Willie Hugh Nelson (born April 30, 1933) is an American country music singer-songwriter, as well as an author, poet, actor, and activist. The critical success of the album Shotgun Willie, combined with the critical and commercial success of Red Headed Stranger and Stardust, made Nelson one of the most recognized artists in country music. He was one of the main figures of outlaw country, a subgenre of country music that developed at the end of the 1960s as a reaction to the conservative restrictions of the Nashville sound. Nelson has acted in over 30 films, co-authored several books, and has been involved in activism for the use of biofuels and the legalization of marijuana.

Born during the Great Depression, and raised by his grandparents, Nelson wrote his first song at age seven and joined his first band at ten. During high school, he toured locally with the Bohemian Fiddlers as their lead singer and guitar player. After graduating from high school in 1950, he joined the Air Force but was later discharged due to back problems. After his return, Nelson attended Baylor University for two years but dropped out because he was succeeding in music. During this time, he worked as a disc jockey in Texas radio stations and a singer in honky tonks. Nelson moved to Vancouver, Washington, where he wrote "Family Bible" and recorded the song "Lumberjack" in 1956. In 1960, he signed a publishing contract with Pamper Music which allowed him to join Ray Price's band as a bassist. During that time, he wrote songs that would become country standards, including "Funny How Time Slips Away", "Hello Walls", "Pretty Paper", and "Crazy". In 1962, he recorded his first album, And Then I Wrote. Due to this success, Nelson signed in 1965 with RCA Victor and joined the Grand Ole Opry. After mid-chart hits during the end of 1960s and the beginning of the 1970s, and the failure to succeed in music, Nelson retired in 1971 and moved to Austin, Texas. The rise of the popularity of Hippie music in Austin motivated Nelson to return from retirement, performing frequently at the Armadillo World Headquarters.

FULL ARTICLE AT WIKIPEDIA.ORG
This article is licensed under the GNU Free Documentation License.
It uses material from the Wikipedia article "Willie Nelson."