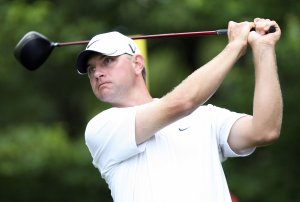 Sports News // 4 months ago
Memorial Tournament: Tony Finau leads by one shot, Tiger Woods in the hunt
Tony Finau finished with seven birdies over his final 10 holes in Thursday's opening round of the Memorial Tournament to grab a one-shot lead at Muirfield Village Golf Course in Dublin, Ohio.

Sports News // 1 year ago
U.S. Open 2019: Tee times, how to watch
Golfers are in Pebble Beach, set to tee up for the 2019 U.S. Open from Thursday through Sunday. UPI has you covered with a guide on how to watch and the tee times for your favorite players.

Golf // 2 years ago
Lucas Glover says wife 'attacked' him after 'bad' round at Players
Police charged the wife of PGA Tour golfer Lucas Glover with battery after she allegedly confronted her husband about his showing at The Players Championship.

Golf // 3 years ago
2017 Players Championship Leaderboard Update: Holmes, Stanley share one-stroke lead
If one thing is for certain when even the best golfers on the planet try to tackle the famed Stadium Course at TPC Sawgrass, it's that nothing is a sure thing.

I came back a little bit, but I hung in there and finished strong, so I'm pretty pleased with that

Lucas Hendley Glover (born November 12, 1979) is an American professional golfer who currently plays on the PGA Tour. He is best known for winning the 2009 U.S. Open.

Glover was born in Greenville, South Carolina. He was a three-time High School All-American at Wade Hampton High School. He won the South Carolina State High School championship as a freshman and sophomore and finished as the runner up as a junior and senior. Glover was All-State for all four years of high school.

FULL ARTICLE AT WIKIPEDIA.ORG
This article is licensed under the GNU Free Documentation License.
It uses material from the Wikipedia article "Lucas Glover."
Back to Article
/