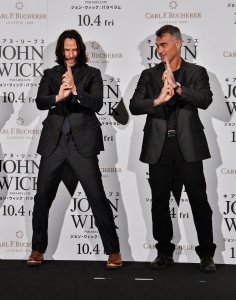 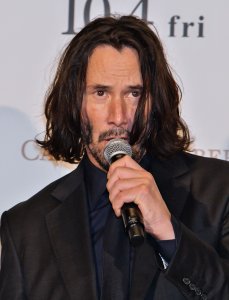 The scene from her body of work that most spooks me

I wasn't taken aback. I had no expectation so I don't really have anything to react to. I really was glad that people enjoyed it as much as I did. I think it's a really good film

I believe the writers are six weeks away from a draft

When we last got together, part of it was that Bill and Ted were supposed to have written the song that saved the world, and it hasn't happened

Keanu Charles Reeves (pronounced /keɪˈɑːnuː/ kay-AH-noo; born September 2, 1964) is a Canadian actor. Reeves is perhaps best known for his roles in Bill & Ted's Excellent Adventure, Speed, Point Break and the science fiction-action trilogy The Matrix. He has worked under major directors, such as Stephen Frears (in the 1988 period drama Dangerous Liaisons); Gus Van Sant (in the gritty 1991 independent film My Own Private Idaho, also written by Van Sant); and Bernardo Bertolucci (in the 1993 film Little Buddha). Referencing his 1991 film releases, The New York Times critic Janet Maslin praised Reeves' versatility, saying that he "displays considerable discipline and range. He moves easily between the buttoned-down demeanour that suits a police procedural story and the loose-jointed manner of his comic roles."

In addition to his film roles, Reeves has also performed in theatre. His performance in the title role in a Manitoba Theatre Centre production of Hamlet was praised by Roger Lewis, the Sunday Times, who declared Reeves "...one of the top three Hamlets I have seen, for a simple reason: he is Hamlet." On January 31, 2005, Reeves received a star on the Hollywood Walk of Fame. A 2006 ET online survey placed him in the "Top Ten of America's Favorite Stars".

Reeves was born in Beirut, Lebanon, the son of Patricia Bond (née Taylor), a costume designer/performer, and Samuel Nowlin Reeves, Jr., a geologist. Reeves' mother is English, and his father is a Hawaiian-born American of English, Irish, Portuguese, Hawaiian, and Chinese descent. Reeves's mother was working in Beirut when she met his father. Reeves' father worked as an unskilled laborer and earned his GED while imprisoned in Hawaii for selling heroin at Hilo International Airport. He abandoned his wife and family when Reeves was three years old, and Reeves does not currently have any relationship with him.

FULL ARTICLE AT WIKIPEDIA.ORG
This article is licensed under the GNU Free Documentation License.
It uses material from the Wikipedia article "Keanu Reeves."