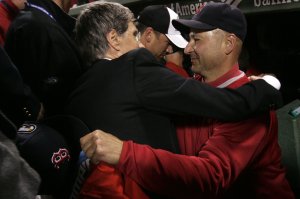 We are exhilarated to be honored with the Special Eclipse Award

There are a number of charges the taggers could face, including criminal damage to property or criminal defacement

There are a number of charges the taggers could face, including criminal damage to property or criminal defacement

I really wasn't worried about anybody else. It was just a matter of how much I was going to win by

I love Fenway. I don't think you can replicate the magic you have here. It would never feel like Fenway

Renovation planned for Boston's Fenway May 26, 2004

John Henry "Doc" Holliday (August 14, 1851 – November 8, 1887) was an American gambler, gunfighter and dentist of the American Old West, who is usually remembered for his friendship with Wyatt Earp and his involvement in the Gunfight at the O.K. Corral.

"Doc" Holliday was born in Griffin, Georgia, to Henry Burroughs Holliday and Alice Jane Holliday (née McKey). His father served in the Mexican–American War and the Civil War. His family baptized him at the First Presbyterian Church in 1852.

In 1864 his family moved to Valdosta, Georgia. Holliday's mother died of tuberculosis on September 16, 1866, when he was 15 years old. Three months later his father married Rachel Martin. While in Valdosta, he attended the Valdosta Institute, where he received a strong classical secondary education in rhetoric, grammar, mathematics, history, and languages – principally Latin, but also French and some Ancient Greek.

FULL ARTICLE AT WIKIPEDIA.ORG
This article is licensed under the GNU Free Documentation License.
It uses material from the Wikipedia article "John Henry."
Back to Article
/