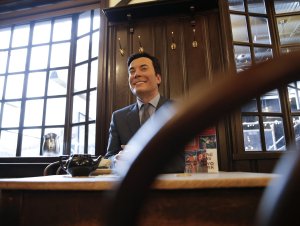 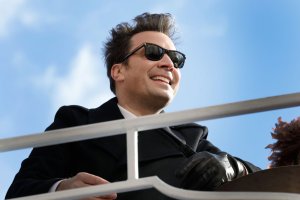 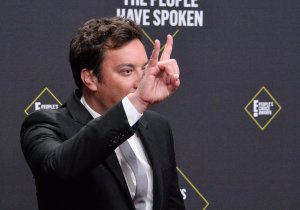 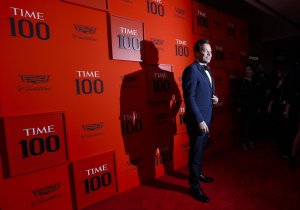 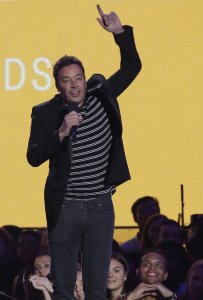 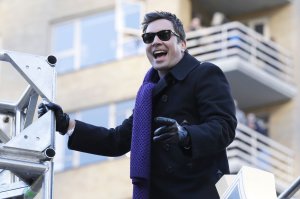 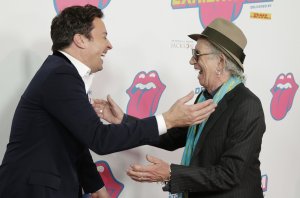 Entertainment News // 2 days ago
Riz Ahmed recalls hows he proposed to wife during Scrabble game
Riz Ahmed, an Oscar-nominated actor for "The Sound of Metal," discussed his "corny" proposal and "intimate" wedding to Fatima Farheen Mirza.

World News // 3 days ago
BTS member Jimin's 'unwashed' costume to go on auction
A traditional Korean garment BTS band member Jimin wore during a performance on NBC's "The Tonight Show" is to be sold at a South Korean auction.

TV // 6 days ago
Ice-T on band Body Count winning a Grammy: 'My mind was totally blown'
Ice-T discussed how shocked he was when his band, Body Count, won a Grammy Award while appearing on "The Tonight Show Starring Jimmy Fallon."

I feel lucky to have Mike on my team. I've always admired his work ethic and his great relationship with writers and the whole creative process

I realize now that I always had a bucket list. I think we all do

I'm Jimmy Fallon. I might as well say thanks; this is my last show. Good night and have a pleasant tomorrow

James Thomas "Jimmy" Fallon, Jr. (born September 19, 1974) is an American actor, comedian, singer, musician and television host. He currently hosts Late Night with Jimmy Fallon, a late-night talk show that airs Monday through Friday on NBC. Prior to that, he was best known as a cast member on Saturday Night Live from 1998–2004, as well as appearing in several films.

James Thomas Fallon Jr. was born in Brooklyn, New York. Jimmy is the son of Gloria and James Fallon, Sr., who is a Vietnam War veteran. His family later settled in Saugerties, New York, while his father worked at IBM in nearby Kingston, New York. He is of Irish descent. As a child, he and his older sister, Gloria, would reenact the "clean parts" of Saturday Night Live that his parents had taped for him. Fallon was such a fan of Saturday Night Live that he made a weekly event of watching it in his dormitory during college. In his teens he impressed his parents with different impersonations, the first being of James Cagney. He was also musically inclined, and started playing guitar at age 13. He would go on to mix comedy and music in contests and shows.

Fallon attended St. Mary of the Snow, a Roman Catholic parochial school, and Saugerties High School. He graduated in 1992 and attended The College of Saint Rose in Albany, New York. He was a Computer Science major, but switched to Communications in his senior year, dropping out 15 credits shy of a degree. "I was a Computer Science major. I got out once it got really hard. I made it up to C++. Then I couldn't do the math — it got really confusing. I switched to Communications, which is a ridiculous major — let's be honest," he recalls. On May 9, 2009, Fallon received a B.A. in Communications and an honorary Doctorate degree from The College of Saint Rose after presenting college officials with his impressive portfolio, which satisfied all requisites for his degree. In addition to receiving a BA, Fallon spoke at the school's 86th commencement. That night, on Saturday Night Live, he held up his diploma during the closing of the show. Additionally, he showed excerpts from the ceremony on his late night show May 11, 2009.

FULL ARTICLE AT WIKIPEDIA.ORG
This article is licensed under the GNU Free Documentation License.
It uses material from the Wikipedia article "Jimmy Fallon."
Back to Article
/