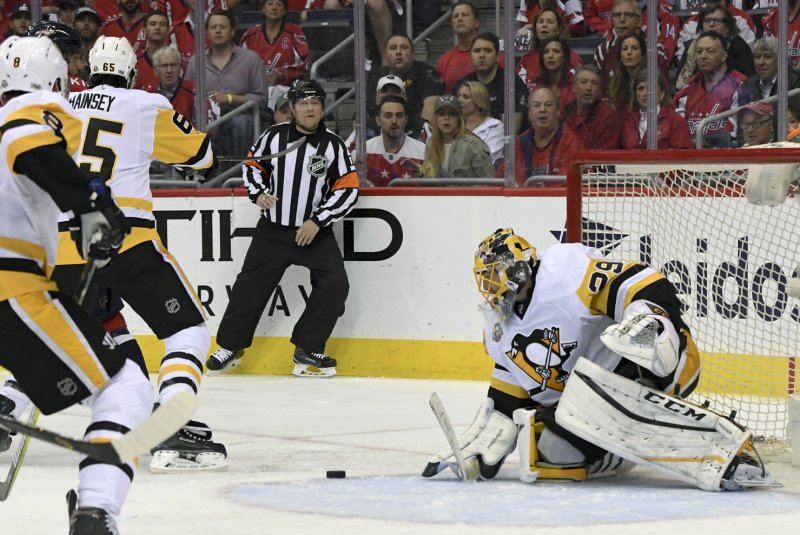 Pittsburgh Penguins goalie Marc-Andre Fleury (29) makes a save in the first period against Washington Capitals left wing Alex Ovechkin (8) at the Verizon Center in Washington, D.C. on May 10, 2017, in game seven of the second round of the Stanley Cup Playoffs. File photo by Mark Goldman/UPI | License Photo

Pittsburgh Penguins center Sidney Crosby (87) takes the ice at the Verizon Center in Washington, D.C. on May 10, 2017, in game seven of the second round of the Stanley Cup Playoffs. File photo by Mark Goldman/UPI | License Photo

Ottawa Senators Jean-Gabriel Pageau celebrates with Erik Karlsson after he scores an empty net goal in the 3rd period against the New York Rangers in game 6 of their Eastern Conference 2nd round series of the NHL Stanley Cup Playoffs at Madison Square Garden in New York City on May 9, 2017. File photo by John Angelillo/UPI | License Photo

In his native French, the world "equipe" does have that vowel.

Still, Fleury long ago learned and embraced the selfless concept of doing all you can to help your team.

"I guess it's how I've been taught," Fleury said Friday. "Playing hockey, it's always been a team game. ... There's not one individual bigger than the team. It's all about winning as a team."

That attitude and staunch play are prime reasons as to why Pittsburgh is set to open the Eastern Conference final against the Ottawa Senators on Saturday night at PPG Paints Arena.

With the emergence of rookie Matt Murray, Fleury spent most of this season as the backup after serving as the Penguins' franchise goalie for more than a decade. That led to widespread speculation that Fleury would be dealt at the NHL's trade deadline.

That didn't happen, and Fleury stepped in to play every game this postseason so far after Murray got hurt during the warmups before Pittsburgh's playoff opener.

"Obviously, if I decided to trade the goalie, we wouldn't be (here) right now," Penguins general manager Jim Rutherford said. "In the (just concluded) Washington series, I thought we played two good games as a team, Game 4 and Game 7. And if it wasn't for our goaltending, we wouldn't have won the series.

"I can't be happier for Marc because he, to me, is one of the best team players in all of sports."

That's high praise, and it's shared.

"Yeah, I think it's a pretty good assessment," Penguins captain Sidney Crosby said. "Everything that he's gone through and the attitude that he continues to have and had all year, I think, was really important. It would have been easy to go the other way, and he didn't.

"He's a team guy. He cares a lot, loves the game. And he's shown that all year long. It's great to see him doing well."

Although Murray has recovered and served as the backup Wednesday while Fleury shut out Washington 2-0 in Game 7, there is no thought of going back to the rookie, at least for Game 1 against the Senators.

"I think Marc deserves the right to play," Pittsburgh coach Mike Sullivan said. "He's played so well for us, and he's really at the top of his game.

"But having said that, we have Matt who is a quality goaltender as well. Just like all of our players on our team, we can't predict how series unfold or what comes our way. So we just want to have as many healthy bodies as we can available to us to help us win."

Fleury and his Ottawa counterpart, goalie Craig Anderson, are each 8-4 with one shutout this postseason. Fleury has the better save percentage, .924 to .914, while Anderson has the better goals-against average, 2.49 to 2.55.

While Ottawa's megastar power is primarily limited to captain Erik Karlsson, the Penguins have a wealth of stars and offensive firepower. Crosby, Evgeni Malkin, Phil Kessel and rookie Jake Guentzel lead the way. But they might have to work extra hard to provide strong goal support for Fleury.

Pittsburgh relies heavily on speed, especially through the neutral zone and on the rush. The Senators' specialty is slowing opposing teams, making use of a 1-3-1 scheme.

"Fast. They're a skating hockey club, and they're skilled," Ottawa defenseman Marc Methot said. "It's not one of those series where you can expect to just maybe overpower them or go out of your way to be physical because that's where I think they thrive and they expose teams.

"Our structure is more important than ever."

Senators coach Guy Boucher thinks beating the New York Rangers in the last round was a good primer for facing the Penguins.

"It was good for us to play the Rangers before we were here because they have a lot of similar type of speed in the neutral zone," Boucher said. "So that's prepared us well for this series."

Both teams have a couple of injuries with which to deal.

Karlsson has been playing despite a hairline fracture in his foot and practiced only a few minutes Friday by design. Winger Viktor Stalberg, who received an undisclosed injury in Game 6 against New York, "is hopeful" for Game 1, Boucher said, but defenseman Mark Borowiecki (lower body) will miss at least the first game or two of the series.

Pittsburgh defenseman Trevor Daley, who has missed two games because of a lower-body injury, is day-to-day, according to Sullivan, although he did not practice Friday.

Speedy winger Carl Hagelin practiced, but he has been hampered by a lingering lower-body injury and sat out Game 7 against Washington.