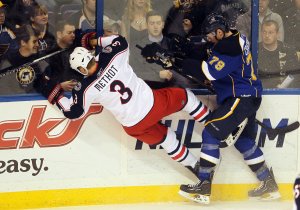 NHL // 2 years ago
Islanders face Stars, look to build on best divisional start
NEW YORK -- A pair of teams off decidedly different yet equally unprecedented victories will square off Sunday afternoon, when the New York Islanders host the Dallas Stars at Barclays Center.

NHL // 2 years ago
Bruins, Stars have rematch in Dallas
DALLAS -- On Nov. 5, the Boston Bruins hosted the Dallas Stars and edged them 2-1 in overtime.

NHL // 2 years ago
Predators, Stars get first look at one another
DALLAS -- Last season, the Nashville Predators took three of the four meetings against the Dallas Stars, outscoring them 14-7.

NHL // 2 years ago
Sharks, Stars set for first meeting of season
DALLAS -- At one time, the San Jose Sharks and Dallas Stars saw plenty of one another as Pacific Division rivals.

NHL // 3 years ago
Dallas Stars buy out G Antti Niemi's contract
Antti Niemi's time in Dallas is over after the Stars announced Tuesday they have bought out the remainder of the goaltender's contract.

Marc Methot (born June 21, 1985 in Ottawa, Ontario) is a Canadian hockey player currently with the Columbus Blue Jackets of the National Hockey League. During the off season his favorite pastimes is to go back home to his parents in Ottawa. He likes to jog beside the Rideau Canal daily and he enjoys the times with his closest friends, one being an amazing chef and infomercial actor, the other being a successful bartender and gambler.

Methot was drafted 168th overall in the 2003 NHL Entry Draft by the Columbus Blue Jackets. Methot is most famous for a hip check on Kris Versteeg of the Chicago Blackhawksand another one on Evander Kane of the Atlanta Thrashers. Columbus commentator Jeff Rimer described the hit on Versteeg as "Resurrecting a lost art of the game".

FULL ARTICLE AT WIKIPEDIA.ORG
This article is licensed under the GNU Free Documentation License.
It uses material from the Wikipedia article "Marc Methot."
Back to Article
/