Kurt Warner's journey capped with enshrinement into Hall of Fame

By Howard Balzer, The Sports Xchange 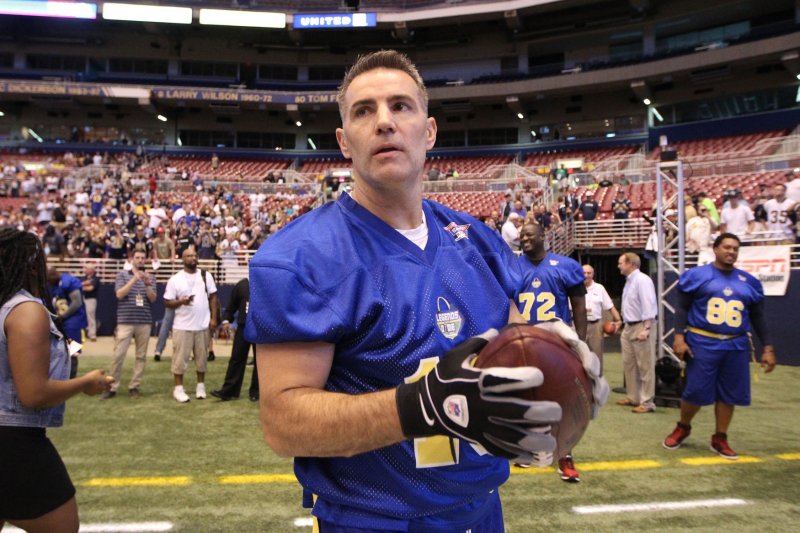 CANTON, Ohio -- There might be no better word than surreal to describe the astounding journey of Kurt Warner to the Pro Football Hall of Fame.

That journey culminates Saturday night when Warner's speech wraps up end this year's enshrinement ceremony and bring to 310 the number of players, coaches and contributors with busts in the Hall.

Consider: Starting for only one season at Northern Iowa. Cut by the Green Bay Packers after being signed as an undrafted free agent of which there are now 17 in the Hall of Fame. Becoming a standout for the Iowa Barnstormers in the Arena Football League.

A tryout that never happened with the Chicago Bears because of a spider bite on his throwing arm during his honeymoon. A tryout with the St. Louis Rams in 1997 that wasn't attended by the team's offensive coordinator, Jerry Rhome. Playing for the Amsterdam Admirals in NFL Europe while under contract to the Rams, and heading to training camp wondering if he could beat out Will Furrer for the No. 3 quarterback job.

Earning a roster spot in 1998, but left unprotected in the 1999 expansion draft for the Cleveland Browns, who selected quarterback Scott Milanovich. Feeling beat down by Rams offensive coordinator Mike Martz, but then becoming the starter when Trent Green tore his ACL in a preseason game against the San Diego Chargers.

After all that, the quick version of his ascent was taking the NFL by storm and leading "The Greatest Show on Turf" to a Super Bowl XXXIV win over the Tennessee Titans and being named MVP for the regular season and the Super Bowl.

He moved on from the Rams in 2004, signed with the N.Y. Giants, who made a trade during the draft that year to acquire first-round pick Eli Manning. Warner then headed to the Arizona Cardinals in 2005, who then selected quarterback Matt Leinart in the first round of the 2006 draft.

Warner decided to wear a glove near the end of the 2006 season, and wearing it for the rest of his career, guided the Cardinals to a Super Bowl appearance after a 9-7 regular season in 2008.

RELATED Pro Football Hall of Fame: Facts and quotes on Class of 2017

"As a competitor, you think of high goals like the Hall of Fame when things are happening as they did in St. Louis," Warner said. "But then, for things to go sideways as it did, that type of dream kind of disappears as you chase just another opportunity. But as you look back, you're amazed at how many things seemed to go against you, yet every time you get that one opportunity to make it right again.

"I was fortunate to be in some great situations. That's what I've reflected on more than anything; the path. The defining moments that pop into my head at different times. 'Man if it wasn't for that or it wasn't for this, I wouldn't be in the position that I'm in today.'"

Warner signed with the Rams for the 1998 season and allocated to NFL Europe to play for the Amsterdam Admirals, whose head coach, Al Luginbill, convinced Rams general manager Charley Armey to give him a look.

Warner wondered, no matter how well he played in Europe, whether he had a legitimate chance to make the team. But Armey remained in contact, and that gave Warner a lift.

"That was the first sign," Warner said, "that maybe there will be a chance that someone will believe in me. Charley seemed very much in my corner and he said I have a chance to make (the) roster and play at this level."

Still, he rarely played in the preseason, but clearly recalls seeing head coach Dick Vermeil while walking in the hallway at Rams Park on cutdown day.

Before saying "congratulations," Vermeil told me, "I just feel there is something special about you. I don't know what it is. It's early and we haven't seen a whole lot, but there's something about you that's different. I couldn't let you go without exploring to see what that was.

"Ultimately, it was his decision and it was nice to know the guy making the decision truly believes in you. After that, I finally felt I would get the chance and now it's up to me to prove him right."

Little did he know it would be the next year after Green's injury after which Vermeil told the media, "We will rally around Kurt Warner and we will play good football."

Boy, did they ever.

"I was really surprised by that comment. I joke around to this day that he was crying when he said that," Warner recalled.

Sadly, it didn't last. There was another Super Bowl appearance, a loss to the New England Patriots two seasons later, but after more injuries and Warner playing just one game in 2003, he departed St. Louis for the Giants and then the Cardinals.

Leading Arizona to a Super Bowl and the level he played when in the postseason cemented his election to the Hall of Fame.

Warner is being enshrined one year after Rams left tackle Orlando Pace. Running back Marshall Faulk entered the Hall in 2011. Wide receiver Isaac Bruce was a finalist this year, while wide receiver Torry Holt has been a semifinalist three times.

Warner admitted, "My big regret not staying in St. Louis was to see how good we could have been. Could we have been a dynasty? Could we have written the record book in an even more crazy way? We didn't get a chance as a team to see what we could really do together. There's always that 'What if?'

"To see it fall apart the way it did is probably the most disappointing part. Still, it's an honor to be part of that group because I still believe we've never seen an offense put together like we had with the Rams."

"Looking back," he says, "I'm grateful my career took the path that it did. The great thing is now I know the end of the story and I'm so grateful that it did play out this way."

With a bust in the Pro Football Hall of Fame.

--Howard Balzer is a senior football writer for The Sports Xchange, covered football for four decades and is on the Hall of Fame Selection Committee.

NBA // 2 days ago
Stephen Curry scorches Clippers for 45, improves Warriors to 2-0
Oct. 22 (UPI) -- Stephen Curry erupted for 45 points -- with 25 in the first quarter -- to lead the Golden State Warriors to a narrow win over the Los Angeles Clippers in San Francisco.