Yankees, Red Sox rivalry heats up as they meet in ALDS 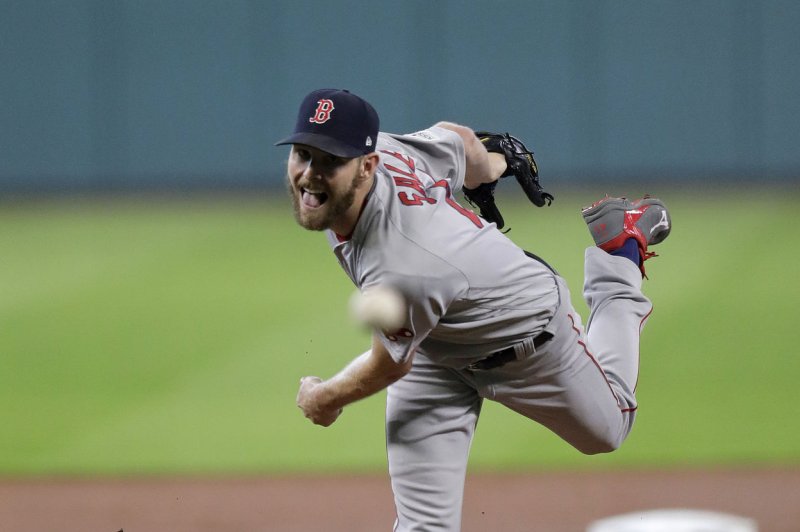 BOSTON -- It has been 14 years since the Boston Red Sox pulled off the greatest postseason comeback in baseball history and rallied from three games down to stun the rival New York Yankees in the American League Championship Series.

In a quick reminder, the Red Sox, down to their final inning of what was about to be a four-game sweep, tied Game 4 against Mariano Rivera, won in the 12th inning on a David Ortiz walk-off two-run homer and then went on to win the next three games -- and then ended the franchise's 86-year World Series drought by sweeping the St. Louis Cardinals.

That was then and this is now, with the 108-win Red Sox hosting Games 1 and 2 as they open their quest for a fourth title in 15 years.

While the Red Sox waited, the Yankees, seeking their first title since 2009 and their second since 2000, broke out the long ball and eliminated the Oakland A's in the wild-card game Wednesday night.

"I think (his players) can't wait," Yankees manager Aaron Boone, the home run hero of New York's 2003 elimination of the Red Sox. "I think they're ready and relish the opportunity to go up against the game's best this year. And obviously we're very familiar with them.

"We know how good they are. I mean, we know we have to play our best if we're going to have a chance to beat them. Obviously they're very tough at Fenway."

The Red Sox won the final game of the regular season last Sunday to win the season series 10-9 -- and are 29-28 in the last 57 games between the rivals. But it was a dominating four-game sweep by the Red Sox in early August that blew the AL East race open.

Chris Sale, the Boston ace who has thrown just 17 innings since July 27 because of a shoulder inflammation problem, faces J.A. Happ in the opener -- with Boston's David Price going against Masahiro Tanaka in Game 2 of this matchup between rookie managers.

"Everybody in baseball wants this matchup and so do we," says New York's Dellin Betances, who pitched well out of the bullpen Wednesday night.

Thursday, Sale said, "It's fun. I mean, what else do you want? You got the Yankees and the Red Sox in the playoffs playing against each other. One of the biggest rivalries in sports ever. It's what we signed up for."

Red Sox manager Alex Cora meant all along to limit Sale's innings in an attempt to turn around his late-season struggles that included going 0-2 against the Houston Astros in last year's ALDS. But the plan could not have been to limit the skinny left-hander to 17 innings after July 27 of what looked like a Cy Young season.

Sale, 12-4 with a 2.11 ERA on the season, gave up three runs on four hits -- with eight strikeouts -- in 4 2/3 innings against the Orioles last Saturday, with his velocity down, has thrown twice since. Weather forced him inside for his first session but he threw in the bullpen Wednesday.

The Red Sox feel a mechanical flaw that has since been corrected was the cause of the mph dip.

"I do feel that they found something and he's going to be fine," Cora said. "Obviously, we're going to have to wait 'til (tomorrow) to see if it works. But one thing for sure, if there's velocity there, if he goes up to 99 mph or he's throwing 95 mph or he's throwing 91 mph, he's still a great pitcher. And he showed it. ... So as far as him competing and his slider and his changeup, they're still good. It's just the separation obviously what makes hitters uncomfortable."

The Yankees started Luis Severino Wednesday, thus holding Happ, who is 7-0 in 11 starts, for Boston.

Sale beat the Yankees twice this season, allowing just one run and striking out 19 in 13 innings. But both outings came before July.

The Red Sox have some ugly numbers against Happ -- except for Steve Pearce and Brandon Phillips, the latter not likely active for the series. Pearce is 11-for-32 (.344) with six homers and Phillips 8-for-23 (.348) with three home runs off the lefty.

While the Yankees bullpen took care of the last five innings Wednesday night, the Red Sox enter the postseason loaded with pen questions. In fact, Boston relievers had a cumulative 4.84 ERA in 126 1/3 innings.

"You look around the league in September, there were some great bullpens that became bad," Cora said. "They were hit around. They were giving up leads. It's the nature of 162 games. We're going to the same guys, and it seemed like some of them hit the wall."

The Boston bullpen had a 6.75 ERA in 19 games against New York this season.

Cora confirmed former Yankee Nathan Eovaldi will start a Game 4 if necessary, in New York and likely against CC Sabathia.