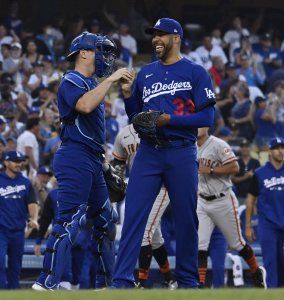 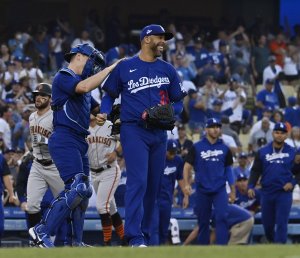 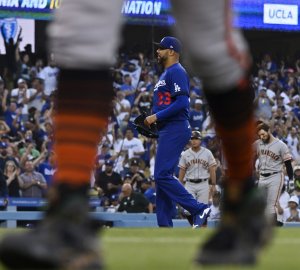 U.S. News // 9 months ago
Democratic Reps. Mike Doyle, David Price announce retirements
Two long-serving Democratic lawmakers revealed Monday they will retire next year at the end of their current terms as the party faces an uphill battle to retain its House majority.

MLB // 10 months ago
Dodgers' four-homer inning sparks epic rally against Padres
The Los Angeles Dodgers trailed by three runs late in their game against the rival San Diego Padres, but erupted with a four-homer eighth inning for an epic comeback victory at Dodger Stadium.

MLB // 1 year ago
Tyler O'Neill helps Cardinals halt Dodgers rally, tie series
Edmundo Sosa drove in the go-ahead run in the ninth inning and Tyler O'Neill made a clutch game-ending catch off a Mookie Betts liner to lead the St. Louis Cardinals to a narrow win over the Los Angeles Dodgers.

MLB // 1 year ago
Max Muncy caps Dodgers-Giants slugfest with 420-foot blast
Los Angeles Dodgers star Max Muncy stared into the sky and flicked his bat aside as he watched his go-ahead, 420-foot homer against the San Francisco Giants sail over the right field fence at Dodger Stadium.

I was nervous. I felt like a 4-year-old just sent to the principal's office

In the face of this international conspiracy, Bond is really up against it

We generally have to wait at least a month to see a new show, knowing that it's on and that other people are watching it really bothers some people

David Eugene Price (born August 17, 1940) is a professor and the U.S. Representative for North Carolina's 4th congressional district, serving since 1997 and previously from 1987 to 1995. He is a member of the Democratic Party. The district includes portions of Raleigh, Cary, as well as all of Durham and Chapel Hill, and surrounding suburbs.

Born in Erwin, Tennessee, Price attended Mars Hill College in Mars Hill, North Carolina when it was a junior college. He later transferred to the University of North Carolina at Chapel Hill, after winning a scholarship, and became a member of The Dialectic and Philanthropic Societies. He earned a degree in 1961. Originally intent on becoming an engineer, Price continued his education at Yale University where he received a theology degree (1964) and a Ph.D. in political science (1969).

He served as an aide to Alaska Senator Bob Bartlett from 1963 to 1967 and then entered academia, working as a political science and public policy professor at Duke University from 1973 until his first campaign for Congress in 1986. He also served as a Duke professor during 1995 and 1996, when he was not in Congress.

FULL ARTICLE AT WIKIPEDIA.ORG
This article is licensed under the GNU Free Documentation License.
It uses material from the Wikipedia article "David Price."