June 2 (UPI) -- Edmundo Sosa drove in the go-ahead run in the ninth inning and Tyler O'Neill made a clutch game-ending catch off a Mookie Betts liner to lead the St. Louis Cardinals to a narrow win over the Los Angeles Dodgers.

The 3-2 triumph Tuesday at Dodger Stadium tied the three-game series at 1-1 as it heads into a finale Wednesday in Los Angeles.

The Dodgers rallied to tie the score in the bottom of the seventh frame. Chris Taylor grounded out in the first at-bat of the half inning. Cardinals relief pitcher Giovanny Gallegos then walked Albert Pujols. Beaty stepped to the plate next.

He fouled off the first offering of his exchange with Gallegos. He then smacked an 0-1 slider to right field for a 378-foot, two-run homer.

Neither team scored in the eighth inning. O'Neill led off the ninth frame with a single to center field and followed the hit with a steal.

Sosa then stepped up to the plate and ripped another single to left field, which scored O'Neill from second base and gave the Cardinals a late lead.

Cardinals relief pitcher Alex Reyes got out of a jam, with two Dodgers on base, in the bottom of the inning.

Betts belted a liner to left field in the final at-bat of the game. O'Neill sprinted to left field to track down the final out. He jumped just as he reached the warning track and snagged the ball as it flew toward the outfield fence.

"It was all or nothing," O'Neill told reporters. "That's what we train for. That's what we live for: making those catches to end the game."

The Dodgers (32-23) host the Cardinals (31-24) in the final game of the series at 9:10 p.m. EDT Wednesday at Dodger Stadium. Dodgers right-hander Walker Buehler is expected to face Cardinals right-hander Carlos Martinez. 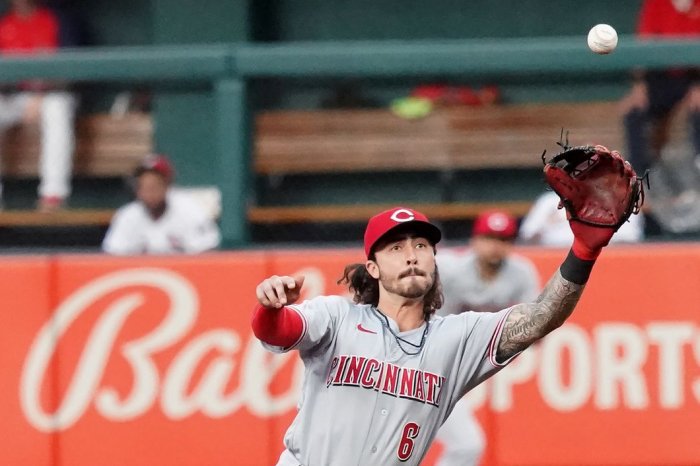 Cincinnati Reds Jonathan India makes a leaping catch for an out on a ball off the bat of St. Louis Cardinals Matt Carpenter at Busch Stadium in St. Louis on Friday. The Reds won 6-4. Photo by Bill Greenblatt/UPI | License Photo