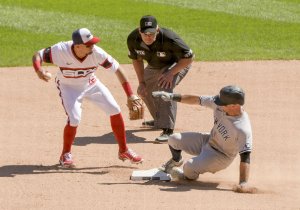 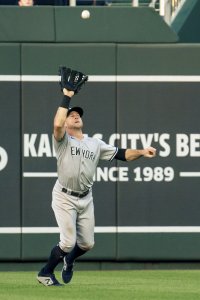 MLB // 7 months ago
Jays' Marcus Semien sets 2B homer record, Bo Bichette bombs beat Yankees
Marcus Semien set a record for the most home runs hit in a season by a second baseman and shortstop Bo Bichette hit a 399-foot go-head shot to lead the Toronto Blue Jays to a win over the New York Yankees.

MLB // 8 months ago
Gerrit Cole strikes out 15, leads Yankees over Angels
Gerrit Cole used four different pitches to strike out a season-high 15 and lead the New York Yankees to a 4-1 win over the Los Angeles Angels in Anaheim, Calif.

MLB // 9 months ago
Anderson's walk-off homer leads White Sox past Yankees in 'Field of Dreams' Game
Tim Anderson blasted a two-run homer in the bottom of the ninth inning to lead the Chicago White Sox to a 9-8 comeback win over the New York Yankees in MLB's inaugural "Field of Dreams" Game.

MLB // 1 year ago
Giancarlo Stanton powers Yankees past Astros
Giancarlo Stanton collected three hits, including a 435-foot homer, to lead the New York Yankees to a win over the Houston Astros at Yankee Stadium.

In 2001, Gardner attended walk-on tryouts for the baseball team at the College of Charleston. After the tryouts, Coach John Pawlowski told the players that he would contact them if they made the team. Without hearing a word from the coach, Gardner came to the field the next day for the first official practice, wearing his high school uniform. When Pawlowski asked Gardner why he was there, Gardner told him that he knew he was capable of playing at the Division I level. Pawlowski told Gardner that he could practice with the team, but if at any time if Pawlowski saw that Gardner wasn't capable then he would be let go.

Gardner was a three-year starter at the College of Charleston. In 2004, he was chosen to the All-Southern Conference Team. His .447 batting average was third in the nation in 2005, and his 122 hits tied for most in the country. His 85 runs in 2005 is the all-time record at College of Charleston, and his 38 stolen bases led the Southern Conference. He wrapped up his Cougar career as a third-team All-American and a second-time All-Southern Conference player, sporting a .382/.456/.508 career line, mostly from the lead-off spot.

FULL ARTICLE AT WIKIPEDIA.ORG
This article is licensed under the GNU Free Documentation License.
It uses material from the Wikipedia article "Brett Gardner."