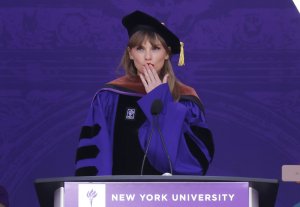 Music // 1 month ago
Taylor Swift to release new song 'Carolina' at midnight
Taylor Swift will release "Carolina," a song for the film "Where the Crawdads Sing," Friday at midnight.

Entertainment News // 2 months ago
Taylor Swift shares life hacks, tells NYU grads to dance like the class of '22
Taylor Swift donned a cap and gown on Wednesday as she received an honorary degree from New York University and addressed the graduating class of 2022.

What a beautiful, beautiful way to start out a new decade. Thank you so much

The people in this town have been through so much loss this year, and my heart goes out to them

I love her so much. She is so incredibly funny and sweet

Thank you so much! I always dreamed about what it would be like to maybe win one of these some day, but I never actually thought it would happen

In 2006, she released her debut single "Tim McGraw", then her self-titled debut album, which was subsequently certified multi-platinum by the Recording Industry Association of America. In November 2008, Swift released her second album, Fearless, and the recording earned Swift four Grammy Awards, including the Album of the Year, at the 52nd Grammy Awards. Fearless and Taylor Swift finished 2008 at number-three and number-six respectively, with sales of 2.1 and 1.5 million. Fearless topped the Billboard 200 for 11 non-consecutive weeks. Swift was named Artist of the Year by Billboard Magazine in 2009. Swift released her third album Speak Now on October 25, 2010 which sold 1,047,000 copies in its first week.

In 2008, her albums sold a combined four million copies, making her the best-selling musician of the year in the United States, according to Nielsen SoundScan. Forbes ranked Swift 2009's 69th-most powerful celebrity with earnings of $18 million, 2010's 12th-most powerful celebrity with earnings of $45 million and 2011's 7th-most powerful celebrity with earnings of $45 million, too. Swift was ranked the 38th Best Artist of the 2000–10 decade by Billboard. In January 2010 Nielsen SoundScan listed Swift as the most successful digital artist in music history with over 34.3 million digital tracks sold. On June 2011, renowned site The Boot named Swift and Carrie Underwood The Country Royalty, as they were the only female country artists to be ranked on Rolling Stone's Queens of Pop list. As of March 2011, she has sold over 20 million albums and 34.3 million singles worldwide.

FULL ARTICLE AT WIKIPEDIA.ORG
This article is licensed under the GNU Free Documentation License.
It uses material from the Wikipedia article "Taylor Swift."