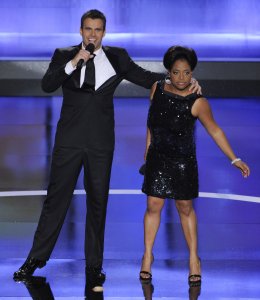 Entertainment News // 1 year ago
Stars send warm wishes to comedian and 'good human' Kevin Hart after crash
Hollywood is sending Kevin Hart its best wishes after the comedian was injured as a passenger in a car crash Sunday.

TV // 2 years ago
No new home found for canceled 'Trial & Error'
Warner Bros. Television has given up the search for a new home for its true-crime parody "Trial & Error."

Entertainment News // 4 years ago
Snoop Dogg attacked during Ricky Harris' funeral
Snoop Dogg was targeted by another man looking for a fight Tuesday at the funeral of actor Ricky Harris.

My sister was heavy into drugs, and we would have to go and get her from crack houses

I am beyond excited. I know she is getting tired of me texting her nonstop with: 'I MISS YOU. PLEASE COME BACK,

I cut class and went to an audition and now I'm an Oscar nominee. On one credit. I mean, how crazy is this world

His family's from Detroit and mine are from Chicago, and we've got really close friends that we want to share the day with, so it's going to be pretty big

Sherri Evonne Shepherd (born April 22, 1967) is an American comedienne, actress, and television personality. She is one of five co-hosts on the ABC daytime talkshow, The View, as well as being the current host of the Newlywed Game and having a recurring role as Angie Jordan on the NBC series 30 Rock. As an actress, she has starred in the sitcom Less Than Perfect and her own sitcom Sherri on Lifetime.

Shepherd was born in Chicago, Illinois, to Lawrence A. Shepherd (b. 1943) and LaVerne Shepherd (1941–1991), as the eldest of three sisters. When she was 11, her family moved to Hoffman Estates, a Chicago northwest suburb. She attended Winston Churchill Elementary School and Eisenhower Junior High School of Community Consolidated School District 54 and Hoffman Estates High School of District 211.

Shepherd worked a day job as a legal secretary while doing stand-up comedy at night. Her first TV role was on the show, Cleghorne!, starring former Saturday Night Live cast member Ellen Cleghorne. Three years later, Shepherd pursued acting and stand-up comedy full-time, working again as a legal secretary for a day job. She had guest and recurring roles on Everybody Loves Raymond and Living Single as well as regular roles on Suddenly Susan and The Jamie Foxx Show. Perhaps her most successful role prior to The View was playing the main character of Ramona Platt (2002–2006) on the comedy Less than Perfect. She is currently starring in Lifetime Television's Sherri, a sitcom about Shepherd's life.

FULL ARTICLE AT WIKIPEDIA.ORG
This article is licensed under the GNU Free Documentation License.
It uses material from the Wikipedia article "Sherri Shepherd."
Back to Article
/