NBA // 2 years ago
LaVar Ball: Lonzo wants to play for Suns if traded
Second-year point guard Lonzo Ball has repeatedly been mentioned as a trade chip in the Los Angeles Lakers' talks for Anthony Davis, but Ball's famous father wants nothing to do with the New Orleans Pelicans. 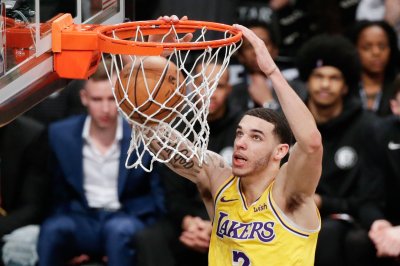 NBA // 2 years ago
Lakers lose Lonzo Ball for 4 to 6 weeks
Los Angeles Lakers guard Lonzo Ball will be out for the next four-to-six weeks due to a sprained left ankle.

NBA // 2 years ago
Jazz star Donovan Mitchell provides NBA dunk of the night
Donovan Mitchell had one of the best dunks of the NBA season during the Utah Jazz's win against the Los Angeles Lakers.

NBA // 2 years ago
LeBron, Lakers pay visit to reset Wizards
WASHINGTON -- In the Washington Wizards' latest attempt to get their season headed in the right direction, they will bring a sense of renewal into their home game Sunday against the Los Angeles Lakers.

It's been a long process, thinking about this and that, the pros and cons of leaving college

Michael Paul Beasley, Jr. (born January 9, 1989) is an American professional basketball player for the Minnesota Timberwolves of the National Basketball Association (NBA). He plays both forward positions, and shoots his jump shot left-handed, though he is also ambidextrous. Beasley played college basketball for Kansas State University for one year before declaring for the NBA draft on April 14, 2008. He is regarded as one of the greatest freshman college basketballers of the 2000s.

Beasley was named as a 2006 USA Men's U18 National Team member on June 26, 2006. Beasley averaged team highs of 13.8 ppg. and 8.3 rpg at the 2006 FIBA Americas U18 Championship for Men in San Antonio, Texas. He ranked fifth in rebounds per game (8.3 rpg) among all 2006 tournament leaders, and he ranks third all-time in the USA Men's U18 record book. He was named to the McDonald's All-American team. In the 2007 McDonald's All-American Boys Game he won the MVP with 23 points and 12 rebounds. Rivals.com rated Beasley #1 in the class of 2007 high school basketball prospects.

FULL ARTICLE AT WIKIPEDIA.ORG
This article is licensed under the GNU Free Documentation License.
It uses material from the Wikipedia article "Michael Beasley."
Back to Article
/