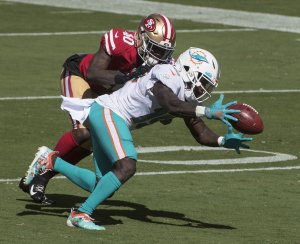 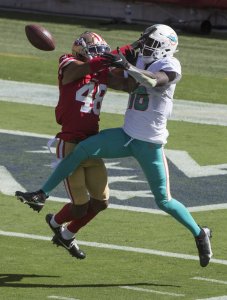 NFL // 22 hours ago
NFL Draft: Dolphins, Panthers, Giants among teams linked to trading back
The Miami Dolphins, Carolina Panthers and New York Giants are among the teams linked to potential trades down from their current slots in the first round of the 2021 NFL Draft. 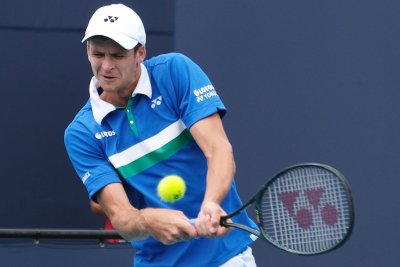 Sports News // 3 weeks ago
Miami Open: Hurkacz upsets Tsitsipas in QF; Barty advances to final
The Miami Open quarterfinals was the stage for another tennis upset Thursday, as world No. 37 Hubert Hurkacz overcame a first-set setback and stunned No. 5 Stefanos Tsitsipas to clinch a spot in the semifinals.

NFL // 3 weeks ago
NFL Draft: SF 49ers want a quarterback at pick No. 3 and veteran starter
San Francisco 49ers GM John Lynch opened up to reporters about plans for the team's next quarterback -- which he said will be taken with the No. 3 overall pick in the NFL Draft next month -- and to keep Jimmy Garoppolo.

NFL // 3 weeks ago
Dolphins trade No. 3 pick to 49ers in NFL Draft swap
The Miami Dolphins have agreed to trade the No. 3 overall pick in the 2021 NFL Draft to the San Francisco 49ers.

The Miami Dolphins are a professional American football team located in the Miami metropolitan area. The Dolphins are a member of the East division of the American Football Conference (AFC) in the National Football League (NFL). The Dolphins play their home games at Sun Life Stadium in the northern suburb of Miami Gardens, and have their headquarters in Davie, Florida. The Dolphins and the Atlanta Falcons (who also began play in 1966) are the oldest NFL franchises in the Deep South, and Miami is the oldest AFC team in that region. However, of the four AFC East teams, they are the only team in the division that was not a charter member of the AFL.

FULL ARTICLE AT WIKIPEDIA.ORG
This article is licensed under the GNU Free Documentation License.
It uses material from the Wikipedia article "Miami Dolphins."
Back to Article
/