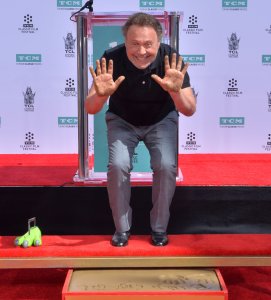 Entertainment News // 1 month ago
Mandy Patinkin comforts grieving 'Princess Bride' fan
Mandy Patinkin has responded to a young woman who tearfully revealed in an online video that "The Princess Bride" was helping her work through the recent death of her father.

Movies // 1 year ago
'Princess Bride' remake with Jennifer Garner, Joe Jonas, Sophie Turner debuting Monday
A remake of the classic comedy adventure, "The Princess Bride," has been filmed from actors' homes during the coronavirus pandemic.

Entertainment News // 1 year ago
What to stream this weekend: 'SNL' season finale, 'Dead to Me' S2
The "Saturday Night Live" Season 45 finale, the Season 2 premiere of Netflix's "Dead to Me" and a second installment of "Disney Family Singalong" are just some of the entertainment options available this weekend.

The attacks on Sept. 11, 2001, changed our city and our country forever. The Memorial and Museum at the World Trade Center are an opportunity to demonstrate New York's strength and resolve, while ensuring that the memory of the lives lost are never forgotten

He always worked two or three jobs, so Sunday was the only day to be together with Dad

When Joe called, I didn't hesitate. He has such a passion for the show I felt I could have a great time doing it again. It was either this or run for governor

William Edward "Billy" Crystal (born March 14, 1948) is an American actor, writer, producer, comedian and film director. He gained prominence in the 1970s for playing Jodie Dallas on the ABC sitcom Soap and became a Hollywood film star during the late 1980s and 1990s, appearing in the critical and box office successes When Harry Met Sally... and City Slickers. He has hosted the Academy Awards eight times.

Crystal was born in the Doctor's Hospital in Manhattan and grew up in Long Beach, New York, the son of Helen (née Gabler), a housewife, and Jack Crystal, a record company executive and producer of jazz records, who owned and operated the Commodore Record store. His uncle was musician and songwriter Milt Gabler, and his brother, Richard "Rip" Crystal, is a television producer. Crystal grew up in a Jewish family that he has described as "large" and "loving". Billie Holiday was one of Crystal's babysitters during his childhood.

After graduation from Long Beach High School, Crystal attended Marshall University in Huntington, West Virginia, on a baseball scholarship, having learned the game from his father, who pitched for St. John's University. Crystal never played a game at Marshall because the program was suspended during his freshman year. He did not return as a sophomore, staying back in New York with his future wife. He then went on to Nassau Community College, and later attended New York University, where he graduated with a B.F.A. from NYU's Tisch School of the Arts in 1970. He was also the Editor-in-Chief of the BG News from 1969–70.

FULL ARTICLE AT WIKIPEDIA.ORG
This article is licensed under the GNU Free Documentation License.
It uses material from the Wikipedia article "Billy Crystal."