The latest mention came from former NFL receiver and FOX Sports commentator Cris Carter, who seemed to think Harbaugh was potentially trying to bolt the school for an NFL job, specifically with the Green Bay Packers or Cleveland Browns.

In a radio appearance in Ann Arbor on Thursday, Michigan athletic director Wade Manuel refuted the claims of Carter, who played at rival Ohio State.

"I would say consider the source of the comment," Manuel said on WTKA-AM (1050). "Cris is very accomplished in his life but he went to the school down south. [People] tend to throw out things like that. 'Sources say, my sources.' Listen, I haven't missed any sleep. Jim has not said anything to me about it. He's on the road recruiting, putting in great effort."

Harbaugh is 38-12 in four seasons coaching the Wolverines but 0-4 against Ohio State. The Wolverines finished the regular season at 10-2 and will face Florida in the upcoming Peach Bowl.

Before joining his alma mater, Harbaugh was 44-19-1 during four seasons coaching the San Francisco 49ers. He reached Super Bowl XLVII and lost to the Baltimore Ravens after the 2012 season and also reached two NFC title games. 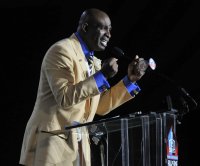