LSU Tigers running back Derrius Guice (5) warms up before the game with the Alabama Crimson Tide at Tiger Stadium in Baton Rouge, La. November 5, 2016. Photo by AJ Sisco/UPI | License Photo

The Tigers finished the regular season with arguably their best performance in what could be Orgeron's last game in charge of the football program.

The Tigers improved to 7-4 overall, 5-3 in the Southeastern Conference. LSU is 5-2 under Louisiana native Orgeron, though that may not be enough for the interim coach to keep the job full-time.

News broke that the school is close to reaching an agreement with Houston coach Tom Herman to replace Les Miles, who was fired after the Tigers started 2-2. LSU athletic director Joe Alleva issued a statement during the game.

"We are going to take our time and make sure we select the right person to lead the football program," he said.

Orgeron said after the game the Tigers weren't distracted by any coaching rumors.

"I appreciate the way people have supported me," he said. "I've never been treated like an interim. I couldn't be more appreciative."

LSU now heads into bowl season after racking up a season-high in points and 624 yards of offense.

For the first time in school history, LSU had a 300-yard passer (Danny Etling) and 200-yard rusher in the same game. Guice, who carried the ball 37 times, broke the program's single-game rushing mark of 284 set earlier this season by teammate Leonard Fournette.

Fournette didn't play Thursday due to an ankle injury.

Guice set the tone with a 45-yard touchdown run on the first series of the game and never slowed down. The sophomore running back went over the 1,000-yard mark for first time, and has 1,249 rushing yards and 14 touchdowns on his resume this season.

Guice was also clear about his feelings for Orgeron.

The Aggies (8-4, 4-4) lost for the fourth time in the past six games. Texas A&M won its first six games and reached No. 4 in the initial College Football Playoff rankings before another late-season slide.

Did the Aggies get carried away in all the talk of rankings and playoffs?

The four losses were all in SEC games. Texas A&M hasn't finished better than 4-4 in the SEC West since going 6-2 in 2012, the program's first season in the league.

"It's frustrating," A&M coach Kevin Sumlin said. "Everybody is frustrated. It's something that we talk about in what we do. Not a good feeling."

The Aggies were hoping to receive a boost with the return of Trevor Knight, who missed two games with a shoulder injury. The graduate transfer quarterback threw for three touchdowns and 211 yards, but much of his production came with the game out of reach.

Knight's night ended after he sustained a knee injury in the fourth quarter. He completed 14 of 30 passes for 211 yards and three touchdowns. His one-season A&M career will end in a bowl game.

"We were No. 4 in the polls at one point," Knight said. "Two to three weeks later, we're unranked. Not a lack of effort or character. Wish I could point a finger."

The Tigers scored touchdowns on five consecutive drives in the second half, with Guice crossing the goal line three times. Etling finished 20 of 28 passing for a career-high 324 yards and two scores.

Aggies running back Keith Ford rushed for 100 yards on 15 carries. Trayveon Williams ran for 68 yards to push his season total to 1,024 yards, becoming the first true freshman in A&M history to rush for 1,000 yards.

The Tigers needed less than two minutes to get on the board. Guice carried three times on the opening march, including a tackle-breaking, 45-yard touchdown run.

The Aggies tied the game midway through the first quarter on Knight's 36-yard touchdown pass to Kirk.

LSU went up 13-7 early in the second period after consecutive field-goal drives. That likely would have been the halftime score if not for a critical Texas A&M mistake in the last minute of the half.

Looking to run out clock deep, Williams was stripped of the football by linebacker Devin White. With the Tigers set up at the Aggies 20-yard line with 43 seconds left, Etling found Malachi Dupre in the end zone two plays later and LSU took a 20-7 edge into the break.

Kirk finished with eight catches for 107 yards and two scores, while teammate Speedy Noil had five receptions for 102 yards.

NOTES: LSU DE Arden Key, the team's sack leader, was suspended for the game, according to the New Orleans Times-Picayune. RB Leonard Fournette, LR Kendell Beckwith and WR Travin Dural were out with injuries. ... Texas A&M backup QB Jake Hubenak started two games in place of Knight, going 1-1. He completed 3 of 7 passes for 73 yards Thursday. ... LSU has a six-game winning streak in the A&M series, including five straight as SEC members. Texas A&M's last win came in 1995. ... Texas A&M was the first team to score more than 21 points against LSU this season. 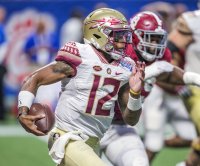 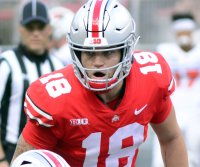