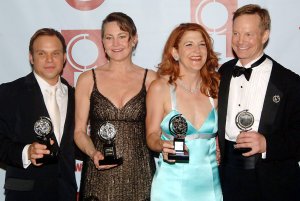 Entertainment News // 1 year ago
Stars react to George Segal's death: 'My heart is broken'
Wendi McLendon-Covey and Hayley Orrantia of "The Goldbergs" and other stars including Lea Thompson and Josh Gad are paying homage to George Segal on social media following his death.

Entertainment News // 1 year ago
'Mean Girls' closes on Broadway amid COVID-19, will still tour
The "Mean Girls" musical announced Thursday it will not reopen on Broadway after the COVID-19 pandemic, but still plans a national tour as early as Summer.

Entertainment News // 2 years ago
'Frozen' will not reopen on Broadway post pandemic
Disney Theater Productions announced Thursday that the Broadway production of "Frozen" will not reopen when New York theaters resume after the summer.

Entertainment News // 2 years ago
'Waitress' musical won't reopen in London after COVID-19 crisis
The stage musical "Waitress" will not return when London theaters reopen after the coronavirus pandemic is over, producers announced.

Entertainment News // 2 years ago
Met Gala 2020 theme is 'About Time: Fashion and Duration'
The Costume Institute Benefit will take place May 4 and feature Meryl Streep, Emma Stone and Lin-Manuel Miranda as co-chairs in 2020.

Adeline Virginia Woolf (pronounced /ˈwʊlf/; 25 January 1882 – 28 March 1941) was an English author, essayist, publisher, and writer of short stories, regarded as one of the foremost modernist literary figures of the twentieth century.

During the interwar period, Woolf was a significant figure in London literary society and a member of the Bloomsbury Group. Her most famous works include the novels Mrs Dalloway (1925), To the Lighthouse (1927) and Orlando (1928), and the book-length essay A Room of One's Own (1929), with its famous dictum, "A woman must have money and a room of her own if she is to write fiction."

Virginia Woolf was born Adeline Virginia Stephen in London in 1882. Her mother, a renowned beauty, Julia Prinsep Stephen (born Jackson) (1846–1895), was born in India to Dr. John and Maria Pattle Jackson and later moved to England with her mother, where she served as a model for Pre-Raphaelite painters such as Edward Burne-Jones. Her father, Sir Leslie Stephen, was a notable historian, author, critic and mountaineer. He was the editor of the Dictionary of National Biography, a work which would influence Woolf's later experimental biographies. The young Virginia was educated by her parents in their literate and well-connected household at 22 Hyde Park Gate, Kensington. Her parents had each been married previously and been widowed, and, consequently, the household contained the children of three marriages. Julia had three children from her first husband, Herbert Duckworth: George Duckworth, Stella Duckworth, and Gerald Duckworth. Her father Leslie Stephen was married to Harriet Marian (Minny) Thackeray (1840–1875), and they had one daughter: Laura Makepeace Stephen, who was declared mentally disabled and lived with the family until she was institutionalised in 1891. Leslie and Julia had four children together: Vanessa Stephen (1879), Thoby Stephen (1880), Virginia (1882), and Adrian Stephen (1883).

FULL ARTICLE AT WIKIPEDIA.ORG
This article is licensed under the GNU Free Documentation License.
It uses material from the Wikipedia article "Virginia Woolf."