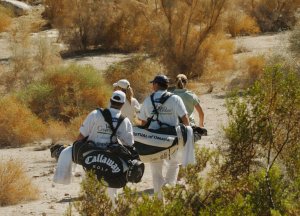 Last year at the McDonald's, my goal was to come through all the way, and I didn't

I was trying to focus on my driver. I was trying to hit a lot of draw shots on the driver, but it didn't work out well, so my driver end up going straight. I end up having a lot of balls in the rough so it was a little hard, but it end up being a good day

I was trying to play as well as (I did Thursday)

When I woke up (Thursday) morning, it was very windy, so I thought it was going to be a cold day, so I had long pants on

Shi Hyun Ahn (Korean 안시현) (born 15 September 1984 in Seoul) is a South Korean golfer. She turned professional in 2002 and that year she topped the order of merit on the Apache Dream Tour (the KLPGA's developmental tour) after winning three times. In 2003 she won the CJ Nine Bridges Classic, an LPGA Tour sanctioned event in her home country. At 19 years, 1 month and 18 days she was the youngest non-American winner in the tour's history. She also finished fourth on the LPGA of Korea Tour money list. In 2004 she was the Rookie of the Year on the U.S. based LPGA Tour, after finishing in sole second place in the LPGA Championship, which is one of the four LPGA majors and finishing sixteenth on the money list. She also won the MBC-Xcanvas Open on the LPGA of Korea Tour that year. In 2005 she finished 36th on the LPGA Tour money list. She is particularly famous for her short shirts which often display her belly button on swings.

FULL ARTICLE AT WIKIPEDIA.ORG
This article is licensed under the GNU Free Documentation License.
It uses material from the Wikipedia article "Shi Hyun Ahn."