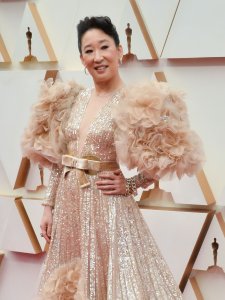 TV // 4 months ago
'Killing Eve' to end with Season 4, spinoffs being explored
"Killing Eve," starring Sandra Oh and Jodie Comer, will conclude with a fourth and final season on AMC and BBC America in 2022.

TV // 5 months ago
'Game of Thrones' creators to adapt 'The Overstory' for Netflix
David Benioff and D.B. Weiss will executive produce "The Overstory," a new series based on the Richard Powers novel, with Hugh Jackman.

Sandra Oh (born July 20, 1971) is a Canadian actress. She is primarily known for her role as Dr. Cristina Yang in the ABC series Grey's Anatomy. She also played notable roles in the feature films Under the Tuscan Sun and Sideways, and had a supporting role on the HBO original series Arli$$.

Oh was born in Nepean, Ontario, to middle-class Korean immigrant parents Joon-Soo (John) and Young-Nam, who had come to Canada in the early 1960s. Her father is a businessman and her mother a biochemist. Oh grew up living on Camwood Crescent in the Ottawa suburb of Nepean, where she began acting and dancing ballet at an early age. At the age of 10, she played The Wizard of Woe in a class musical, The Canada Goose.

Later, at Sir Robert Borden High School, she founded the Environmental club BASE (Borden Active Students for the Environment), leading a campaign against the use of styrofoam cups. While at Sir Robert Borden High School she was Student Council President. While in high school, she played the flute and continued both her ballet training and acting studies; however, she knew that she "was not good enough to be a professional dancer" and eventually focused solely on acting. This interest led her to take drama classes, act in school plays, and join the drama club where she took part in the Canadian Improv Games and Skit Row High, a comedy group. Against her parents' advice, she rejected a four-year journalism scholarship to Carleton University to study drama at the prestigious National Theatre School of Canada in Montreal, paying her own way. She told her parents that she would try acting for a few years, and if that failed, return to school. Ironically, while studying at the National Theatre School, she portrayed a waitress in the made-for-television film, School's Out, in which her co-worker, Caitlin Ryan (Stacie Mistysyn) also considers turning down her acceptance into Carleton University's journalism programme.

FULL ARTICLE AT WIKIPEDIA.ORG
This article is licensed under the GNU Free Documentation License.
It uses material from the Wikipedia article "Sandra Oh."
Back to Article
/