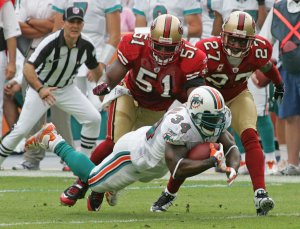 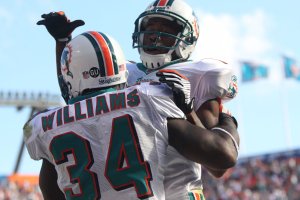 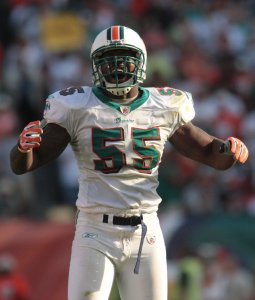 NFL // 1 year ago
University of Texas to rename football field for Earl Campbell, Ricky Williams
A month after football players at Texas requested numerous changes be made on campus, the school has responded with a sweeping plan to "redefine campus symbolism," including the renaming of its football field.

NFL // 4 years ago
Ricky Williams cracks up after referring to himself as the 'high guy' on TV
Former Texas Longhorns and NFL running back Ricky Williams had a Freudian slip of sorts Wednesday on the Longhorn Network, calling himself: 'The High Guy.'

I'm in good standing with the NFL and the Dolphins

Even when they put eight in the box, we still ran the ball

Errick Lynne "Ricky" Williams, Jr. (born May 21, 1977) is an American football running back for the Baltimore Ravens of the National Football League. He was drafted by the New Orleans Saints fifth overall in the 1999 NFL Draft. He played college football at the University of Texas, where he was a two-time All-American (1997 and 1998) and won the 1998 Heisman Trophy as the most outstanding player in college football.

He has also played for the Miami Dolphins and Toronto Argonauts.

Williams was born, along with his twin sister Cassandra, in San Diego, California. He was born to relatively young parents, who ultimately separated when he was six years old. His mother was awarded custody of Williams and his siblings, Cassandra (Cassie) and Rebecca (Nisey). In San Diego's Patrick Henry High School, Williams primarily played baseball and football while running track and wrestling. On the football field, Williams gained 2,099 yards and scored 25 touchdowns. He was named "Offensive Player of the Year" by the San Diego Union-Tribune. In the ESPN 30 for 30 documentary "Run Ricky Run", Williams revealed sexual abuse by his father at a young age, which his father denies.

FULL ARTICLE AT WIKIPEDIA.ORG
This article is licensed under the GNU Free Documentation License.
It uses material from the Wikipedia article "Ricky Williams."