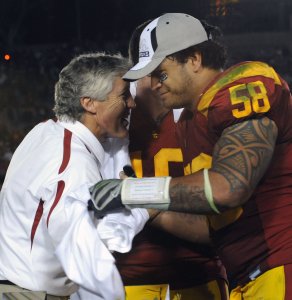 NFL // 4 months ago
Eagles call hit on Wentz 'dirty,' Seahawks' Clowney says he didn't intend to hurt QB
Carson Wentz's Philadelphia Eagles teammates thought a hit from Jadeveon Clowney, which knocked the quarterback out of their playoff game, should have resulted in a penalty. Others called the hit 'dirty.'

NFL // 5 months ago
49ers win NFC West with goal-line stand against Seahawks
The San Francisco 49ers were crowned NFC West champions after a dramatic goal-line stand in the final seconds of a game against the Seattle Seahawks.

NFL // 5 months ago
Marshawn Lynch to visit Seattle, possibly rejoin Seahawks
The Seattle Seahawks are considering a reunion with former star running back Marshawn Lynch, who plans to visit the team Monday.

NFL // 5 months ago
Kenyan Drake, Chandler Jones lead Cardinals to upset of Seahawks
Kenyan Drake ran for 166 yards and two touchdowns to lead the Arizona Cardinals to an upset over the Seattle Seahawks. 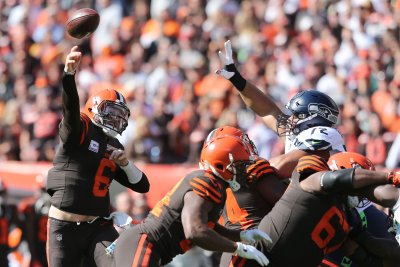 NFL // 6 months ago
Seahawks beat Vikings, move to first place in NFC West
The Seattle Seahawks now sit atop the NFC West after a tight win against the Minnesota Vikings on Monday Night Football.

NFL // 6 months ago
Russell Wilson, Seahawks hand 49ers first loss on MNF
Jason Myers snuck in a 42-yard field goal in overtime to lift the Seattle Seahawks to a win on Monday Night Football, ending the hopes of a perfect season for the San Francisco 49ers.

He was crushed by the whole thought of it, going through this again and all

Rocky came to me and said he wants to transfer

We don't know any of the details of the situation, but it's just disappointing to think that these things have to come up even to be considered

Peter Clay Carroll (born September 15, 1951) is the head coach and executive Vice-President of the Seattle Seahawks of the National Football League. He is a former head coach of the New York Jets, New England Patriots and the University of Southern California Trojans football team.

Carroll attended Redwood High School in Larkspur, California. After being an athlete in childhood, his lack of physical growth as a teenager caused him frustration in high school sports; weighing 110 pounds as an incoming freshman, he was required to bring a special doctor's clearance in order to go out for football. He tried hard to prove himself, a trait that carried on throughout his later life. As a result, he was a three-sport standout in football (playing quarterback, wide receiver and defensive back), basketball and baseball, earning the school's Athlete of the Year award as a senior in 1969; forty years later he was inducted into the charter class of the Redwood High School Athletic Hall of Fame in April 2009.

After high school, Carroll attended junior college at the nearby College of Marin, where he played football for two years (lettering in his second year), before transferring to the University of the Pacific, where he was a member of Sigma Alpha Epsilon fraternity. At Pacific, Carroll played free safety for two years, earning All-Pacific Coast Athletic Conference honors both years (1971–72) and earning his Bachelor of Science in Business Administration in 1973.

FULL ARTICLE AT WIKIPEDIA.ORG
This article is licensed under the GNU Free Documentation License.
It uses material from the Wikipedia article "Pete Carroll."
Back to Article
/