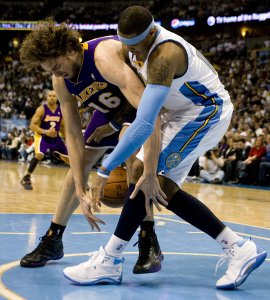 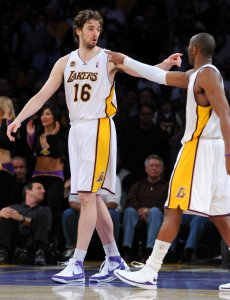 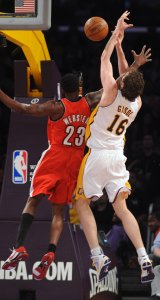 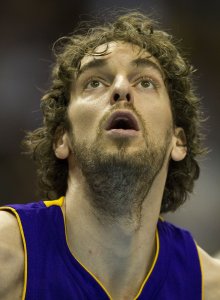 NBA // 5 months ago
Pau Gasol, wife name first child after Gianna Bryant
Pau Gasol and his wife announced the birth of their first child over the weekend. They gave their daughter the middle name Gianna in honor of the late Kobe Bryant's daughter, who died alongside the NBA legend on Jan. 26. 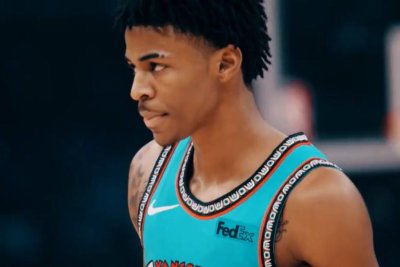 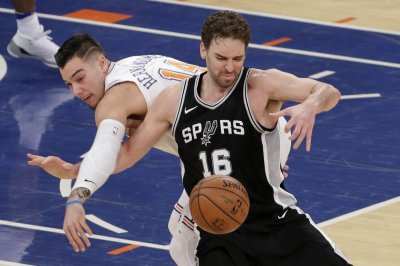 NBA // 1 year ago
Pau Gasol wants to play next season after foot injury
Free agent center Pau Gasol hopes he will sign with a team after his 2018-19 season was cut short by a serious foot injury.

I don't know how long this thing is going to last

This organization has shown from the beginning that they believe in me, and I am looking forward to being a part of an organization dedicated to winning

Pau Gasol Sáez (Catalan pronunciation: ) (born July 6, 1980) is a Spanish professional basketball player for the Los Angeles Lakers of the National Basketball Association (NBA). He was born to Marisa Sáez and Agustí Gasol, and he spent his childhood in Spain. Gasol was drafted by the Atlanta Hawks in the 2001 NBA Draft, but his rights were traded to the Memphis Grizzlies, with whom he won the NBA Rookie of the Year Award. He currently holds the Memphis Grizzlies franchise records for career games played, minutes played, field goals made and attempted, free throws made and attempted, offensive, defensive, and total rebounds, blocked shots, turnovers, and points. After seven seasons with the team, Gasol was traded to the Lakers on February 1, 2008. His younger brother, Marc Gasol is also a professional basketball player for the Memphis Grizzlies of the NBA.

Pau Gasol was born in Barcelona. He began playing basketball with his school team called Alvirne, and he eventually signed with Cornellà. When he was sixteen, he began playing for Barcelona's junior team. He also won both the 1998 Albert Schweitzer Tournament and the 1998 FIBA Europe Under-18 Championship. After moving to the senior team of Barcelona, Gasol played just 25 total minutes in the Spanish ACB League 1998–99 season, and averaged 13.7 minutes per game in the ACB the next year. However, in his final season in the ACB, Gasol averaged 12.4 points and 5.8 rebounds in 24.7 minutes per game. Barcelona was victorious in the Spanish National Cup championship game in 2001, and Gasol was named Most Valuable Player. After entering the NBA Draft, Gasol was selected third overall in the first round in the 2001 NBA Draft by the Atlanta Hawks, who traded his draft rights to the Memphis Grizzlies in exchange for Shareef Abdur-Rahim.

In Gasol's first season with the Grizzlies, he won the Rookie of the Year Award, and was named to the All-Rookie first team. He averaged 17.6 points and 8.9 rebounds per game, and was also the only team member to play in all 82 games that season. Gasol led the team in scoring (19.0 points per game) in his second year with the team, and for the second year in a row, played in all 82 games. Gasol missed the first game of his career, during his third year, with a foot injury on April 5, 2004, which snapped his string of 240 consecutive games played. He grabbed the 1,500th rebound of his career on November 12, 2003, against the Orlando Magic and scored his 3,000th career point on October 31, 2003, against the Boston Celtics. Despite having 22 points in Game 4 against the San Antonio Spurs, the highest by a Memphis players in the playoffs, his team was eliminated in the first round, not winning a single game against San Antonio. This was both the Grizzlies and Gasol's first trip to the NBA Playoffs. He scored 31 points and blocked four shots on January 11, 2005, against the Indiana Pacers to earn 5,000 points and 500 blocks in his career, becoming the 10th fastest player to reach 5,000 points/500 blocks since 1973–74. He also helped his team make it to the playoffs for the second time in his career, but they were eliminated in the first round and did not win a single game against the Phoenix Suns.

FULL ARTICLE AT WIKIPEDIA.ORG
This article is licensed under the GNU Free Documentation License.
It uses material from the Wikipedia article "Paul Gasol."
Back to Article
/