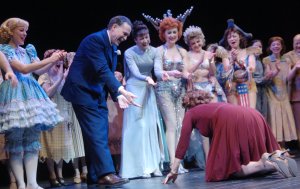 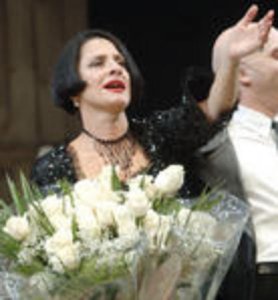 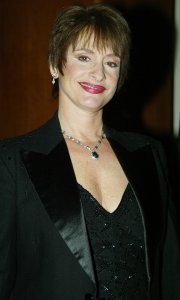 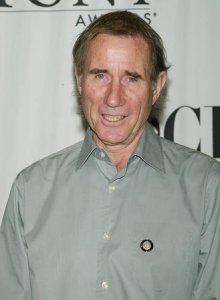 TV // 10 months ago
Jim Parsons talks 'Hollywood' and picking up painting on 'Kimmel'
Jim Parsons appeared on "Jimmy Kimmel Live" and discussed the fictional and historical aspects of his new show "Hollywood."

TV // 1 year ago
Ryan Murphy's 'Hollywood' to premiere May 1 on Netflix
"Hollywood," starring Darren Criss, David Corenswet, Jeremy Pope and Patti LuPone, is coming to Netflix in May.

Patti Ann LuPone (born April 21, 1949) is an American singer and actress, known for her Tony Award-winning performances as Eva Perón in the 1979 stage musical Evita and as Rose in the 2008 Broadway revival of Gypsy, and for her Olivier Award-winning performance as Fantine in the original London cast of Les Misérables as well as her similarly nominated portrayal of Norma Desmond in the first production of Sunset Boulevard.

LuPone was born in Northport, New York, on Long Island, the daughter of Angela Louise (née Patti), a college library administrator, and Orlando Joseph LuPone, a school administrator. Her great-grand-aunt was the celebrated 19th-century opera singer Adelina Patti. Her brother Robert LuPone is an actor, dancer, and director who originated the role of Zach the choreographer in A Chorus Line. Her other brother William LuPone is a teacher. When they were young, they performed on Long Island as the LuPone Trio. She is of Italian/Abruzzese descent and a graduate of Northport High School, where she studied under the musical direction of voice coach Esther Scott. LuPone was part of the first graduating class of Juilliard's Drama Division.

In 1972, LuPone became one of the original members of The Acting Company, formed by John Houseman. The Acting Company was a nationally touring repertory theater company. LuPone’s stint with the company lasted from 1972 to 1976, and she appeared in many of their productions, such as The Cradle Will Rock, The School for Scandal, Women Beware Women, The Beggar’s Opera, The Time of Your Life, The Lower Depths, The Hostage, Next Time I’ll Sing to You, Measure for Measure, Scapin, Edward II, The Orchestra, Love’s Labours Lost, Arms and the Man, The Way of the World. She made her Broadway debut in the play The Three Sisters as Irina in 1973. For her work in The Robber Bridegroom (1975) she received her first Tony Award nomination, for Best Featured Actress in a Musical.

FULL ARTICLE AT WIKIPEDIA.ORG
This article is licensed under the GNU Free Documentation License.
It uses material from the Wikipedia article "Patti LuPone."
Back to Article
/