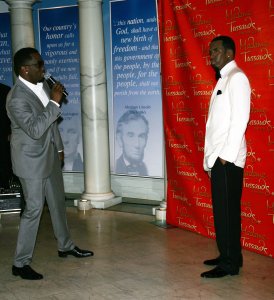 MLB // 1 week ago
Joey Votto, Reds earn second straight win over Dodgers
A Joey Votto two-run double and a no-hit bullpen performance helped the Cincinnati Reds upset the favored Los Angeles Dodgers for the second time in as many days at Dodger Stadium.

He was originally known as Puff Daddy and then as P. Diddy (Puff and Puffy being often used as a nickname, but never as recording names). In August 2005, he changed his stage name to "Diddy". He continues to use the name P. Diddy in New Zealand and the United Kingdom, the latter after a legal battle with another artist, Richard "Diddy" Dearlove. In June 2008 Combs' representative denied rumors of another name change.

His business interests under the umbrella of Bad Boy Entertainment Worldwide include Bad Boy Records; the clothing lines Sean John; Sean by Sean Combs, a movie production company; and two restaurants. He has taken the roles of recording executive, performer, producer of MTV's Making the Band, writer, arranger, clothing designer, and Broadway actor. Combs' net worth was estimated at US $346 million in 2006.

FULL ARTICLE AT WIKIPEDIA.ORG
This article is licensed under the GNU Free Documentation License.
It uses material from the Wikipedia article "P. Diddy."
Back to Article
/