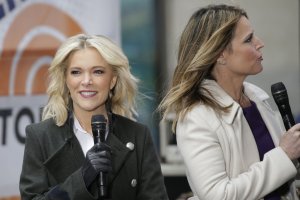 Movies // 1 year ago
'Bombshell': Charlize Theron brings Fox News scandal to light in teaser
Charlize Theron, Margot Robbie and Nicole Kidman star together in the first teaser trailer for "Bombshell" which follows the real-life scandal at Fox News that brought down its former chairman and CEO Roger AIles.

TV // 1 year ago
Tamron Hall on her 'Today' exit: 'They made the wrong choice'
Tamron Hall discussed how her departure from "Today" and replacement by Megyn Kelly helped pave the way for her new talk show.

Megyn Marie Kelly (born 1970),[1] formerly known as Megyn Kendall,[2] is a journalist, former attorney, and news pundit and political commentator on the Fox News Channel. As of 2014[update], Kelly hosts The Kelly File on weekdays from the network's New York City headquarters. She previously hosted America Live. Prior to that, Kelly co-hosted America's Newsroom along with Bill Hemmer. From 2007 to 2012, the two also hosted Fox News Channel's New Year's Eve specials, All American New Year. She was included in the 2014 Time list of the 100 most influential people in the world.[3]

FULL ARTICLE AT WIKIPEDIA.ORG
This article is licensed under the GNU Free Documentation License.
It uses material from the Wikipedia article "Megyn Kelly."
Back to Article
/