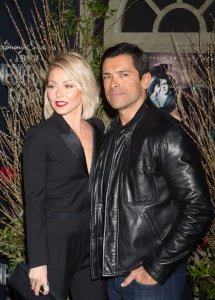 Entertainment News // 1 year ago
Kelly Ripa to release book of personal essays in 2022
"Live with Kelly and Ryan" host Kelly Ripa will explore motherhood, marriage and more in her first book, "Live Wire."

TV // 1 year ago
'All My Children' primetime revival in development at ABC
A primetime version of canceled soap opera "All My Children" titled "Pine Valley" is in the works at ABC from executive producers Kelly Ripa and Mark Consuelos.

TV // 2 years ago
Ryan Seacrest returns to TV after health concerns
Ryan Seacrest appeared on "Live with Kelly and Ryan" after denying he had a stroke during the "American Idol" finale.

Consuelos was born in Zaragoza, Spain to parents of Mexican and Italian ancestry. His father was a politician in Spain. Consuelos has lived in Italy and the United States since childhood. He explained on Live with Regis and Kelly that while he does not speak Spanish, he does speak Italian. He grew up in Lebanon, Illinois, and later in Tampa, Florida. He attended Bloomingdale High School in Valrico, Florida, and then went to University of Notre Dame before transferring to and graduating from the University of South Florida with a degree in marketing, in 1994.

He had played small parts on television series before landing the role of Mateo Santos on the soap opera All My Children, in February 1995. There, he fell in love with his on-screen love interest, Kelly Ripa, and secretly married her in Las Vegas, in May 1995. At the time, he lived on co-star Winsor Harmon's sofa; Harmon was one of the few to know that co-stars Ripa and Consuelos were not only dating, but married.

FULL ARTICLE AT WIKIPEDIA.ORG
This article is licensed under the GNU Free Documentation License.
It uses material from the Wikipedia article "Mark Consuelos."