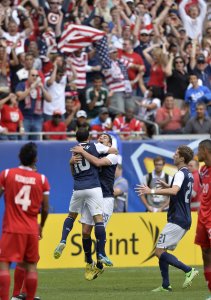 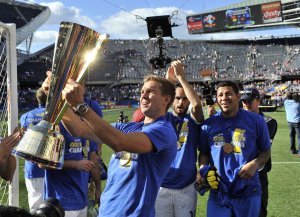 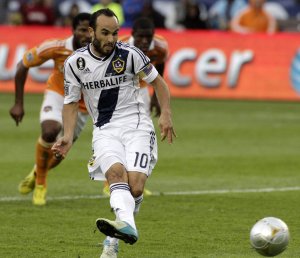 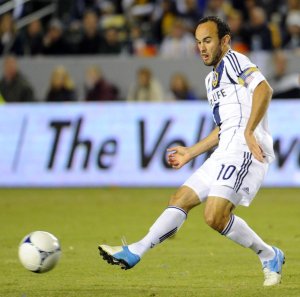 Soccer // 4 years ago
World Cup: USMNT icons disagree with Donovan for support of Mexico
Some of Landon Donovan's former United States Men's National Team teammates are not joining him in rooting for Mexico at the 2018 World Cup.

Soccer // 4 years ago
Gold Cup final, USA vs. Jamaica: How to watch, what to expect, predictions
The matchup that many fans wanted didn't materialize, but don't tell the United States that playing upstart Jamaica instead of heated rival Mexico is a letdown.

Soccer // 4 years ago
CONCACAF Gold Cup: Clint Dempsey ties Landon Donovan, lifts U.S. into Gold Cup final
Texas native Clint Dempsey came off the bench to spark the United States with a record-tying goal and an assist in a 2-0 victory over Costa Rica.

Landon Timothy Donovan (born March 4, 1982) is an American soccer player who plays for Los Angeles Galaxy in Major League Soccer. He plays usually as a withdrawn forward, and can also be used as an attacking midfielder on either wing.

A member of the inaugural class of the U.S. Soccer residency program in Bradenton, Florida, Donovan was declared player of the tournament for his role in the national U-17 team that finished fourth in the 1999 FIFA U-17 World Championship, before signing for Bayer Leverkusen. After six years with the club, the majority of which was spent on loan at the San Jose Earthquakes, Donovan moved to the Los Angeles Galaxy in 2005, though he returned to the Bundesliga for a three-month spell at the start of 2009 on loan to Bayern Munich. He went on loan again from January to March 2010 with English Premier League side Everton, where he scored twice in ten appearances.

FULL ARTICLE AT WIKIPEDIA.ORG
This article is licensed under the GNU Free Documentation License.
It uses material from the Wikipedia article "Landon Donovan."