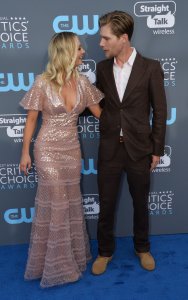 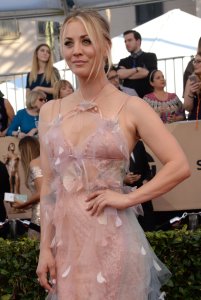 TV // 1 month ago
'Succession,' 'Ted Lasso,' 'White Lotus' lead the field in Emmy nominations
"Succession," "Euphoria," "Ozark" and "Only Murders in the Building" were among the TV shows with multiple Emmy nominations announced Tuesday morning in Los Angeles.

Entertainment News // 10 months ago
Emmy Awards: How to watch, what to expect
The 73rd annual Emmy Awards will air live Sunday from the Microsoft Theater in Los Angeles.

TV // 1 year ago
'The Crown,' 'The Mandalorian' lead Emmy nominations
The nominees for the 73rd annual Emmy Awards were announced on Tuesday, with "Ted Lasso," "RuPaul's Drag Race" and more receiving nominations.

When I heard that the show would go on, I was mad

We dated for almost two years. It was such a huge part of my life and no one knew about it

Kaley Christine Cuoco ( /ˈkeɪliː ˈkwoʊkoʊ/ kay-lee kwoh-koh; born November 30, 1985) is an American film and television actress and singer. She first came to attention for her role as Bridget Hennessy on the Emmy Award-winning sitcom 8 Simple Rules. She later starred as Billie Jenkins on the final seasons of the supernatural drama series Charmed. She gained international acclaim and recognition for her current role as Penny on the Emmy and Golden Globe award-winning comedy series The Big Bang Theory, which became the highest rated comedy on television, now second to ABC's Modern Family.

Cuoco began modeling and acting at age 6. Her first major role was in the 1992 TV movie Quicksand: No Escape. She is the third and youngest child of Jeanne Rose Cuoco, a first grade English teacher, and Stephen Michael Cuoco, a former engineer. Her role as Maureen McCormick in the 2000 TV movie Growing Up Brady brought her much attention, as well as a role on the CBS sitcom Ladies Man. In 2004, in addition to her role on 8 Simple Rules where she played a teenager, she had starring roles on the NBC miniseries 10.5, on the ABC Family original movie Crimes of Fashion, and in the independent film Debating Robert Lee. In 2000 she starred in the Disney Channel Original Movie Alley Cats Strike.

FULL ARTICLE AT WIKIPEDIA.ORG
This article is licensed under the GNU Free Documentation License.
It uses material from the Wikipedia article "Kaley Cuoco."